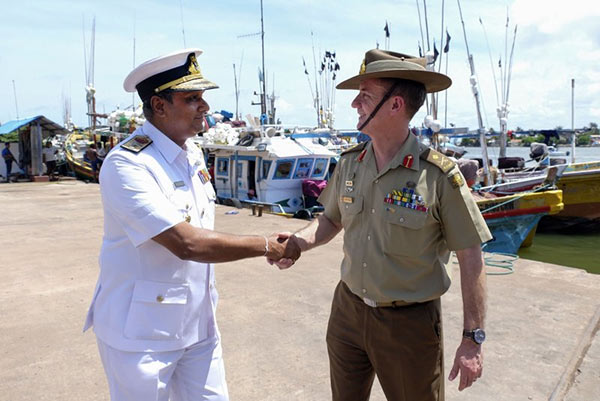 An Australian general in charge of combating illegal migration said Tuesday that there’s been an increase in the number of Sri Lankans seeking to enter Australia illegally by boat in recent months.

Maj. Gen. Craig Furini, head of Operation Sovereign Borders, said during a visit to the island nation that since May, 38 people have been returned to Sri Lanka by Australian authorities. He said Sri Lanka’s navy has intercepted 41 other people in the Indian Ocean who were traveling to Australia illegally by fishing boat, and that many planned boat journeys were thwarted by law enforcement authorities in Sri Lanka.

Furini visited the Negombo fishing harbor north of Sri Lanka’s capital, Colombo, where some of the boats have departed from in the past.

“Look, there has been a slight increase recently, they could be down to a number of factors that include Australia’s domestic political situation; in early May we had an election. Obviously the tragic bombings here may have played a factor,” Furini said. Coordinated bombings on churches and hotels on Easter Sunday in Sri Lanka killed more than 260 people.

“But there are also a whole bunch of unknowns as to why people would be seeking to come to Australia illegally by boat,” Furini said. “Before Operation Sovereign Borders in the period from 2008 to 2013, 50,000 people came illegally by boat on 820 separate boat journeys and tragically around 1,200 of them died at sea. We will never allow that to happen again.”

Many Sri Lankans, mostly those from the ethnic Tamil minority, fled to other countries as refugees to escape the country’s long civil war and many of them took arduous sea journeys by fishing boats to Australia. The civil war ended in 2009.