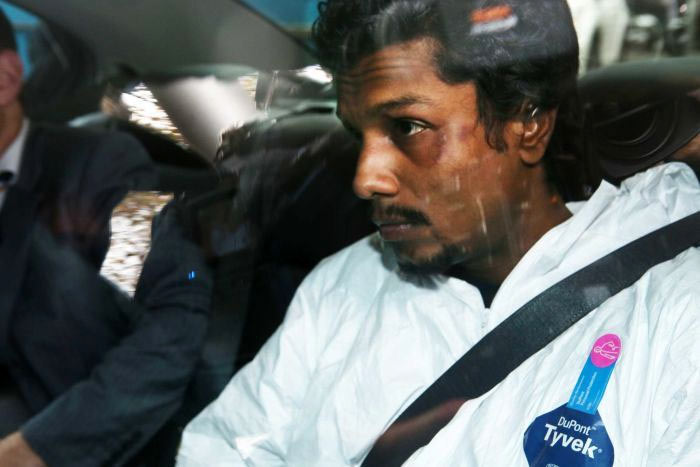 CANBERRA, Australia – A Sri Lankan man who threatened to blow up a Malaysia Airlines plane with 222 people on board had his prison sentence slashed on Friday by an Australian appeals court because he had been in a psychotic state and the fake bomb he had brandished posed no danger.

Manodh Marks, 27, was the first person in Australia to be convicted of attempting to take control of an international flight by force and was sentenced in June 2018 to 12 years in prison. He had pleaded guilty to the charge that carries a potential maximum of 20 years in prison.

The Victoria state Court of Appeal reduced that sentence to eight years. Marks has already served half of his reduced five-year non-parole period, after which he will be deported to Sri Lanka.

The three appeal judges found that the sentencing judge should not have treated the offending as having equivalent gravity to using a real bomb.

The appeal judges also ruled that Marks’s psychotic state had reduced his moral culpability, despite it being drug induced.

His lawyer Paul Smallwood told the appeals court Marks was heading home to Sri Lanka when he boarded the flight heading to Malaysia in May 2017.

The former hospitality student had been diagnosed with schizophrenia two weeks before he attempted to fly to Colombo after living in Melbourne for a year.

Marks had been released from a Melbourne psychiatric ward only six hours before his flight took off.

He used crystal methamphetamine between his release and boarding the plane, a decision Smallwood described as “ill-advised.”

Within 15 minutes of takeoff, an agitated Marks ran down the aisle to the cockpit door, holding a device with blue flashing lights in his hand and threatening to “blow the … plane up.” He demanded to see a pilot, but was not allowed to.

A pilot made a mayday call and turned the plane around. Marks was overpowered by passengers and restrained with cable ties as the flight returned to Melbourne Airport.

The drama came after Malaysia Airlines lost two planes in 2014. Flight 370 is thought to have crashed in the southern Indian Ocean after flying far off course for reasons still not explained. Flight 17 was shot down over eastern Ukraine by a missile investigators said belonged to a Russia-based military unit.

The device Marks carried turned out to be a portable speaker and a power bank with lights.

The sentencing judge had dismissed any distinction between a fake and real bomb as illusory, comparing the case to the use of a fake gun in an armed robbery.

A psychiatrist testified that Marks had been in a methamphetamine-induced acute psychotic state when a screaming voice in his head made him fear the plane was going to crash.

He attempted to force the plane to return to Melbourne to avoid the crash.

“I am doing this because I want to save all of you,” witnesses reported Marks saying.