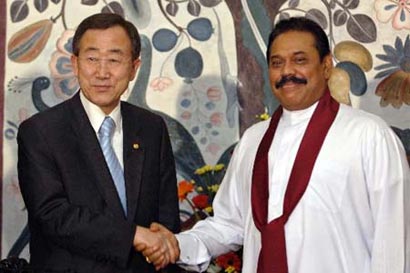 22 June 2010 – Secretary-General Ban Ki-moon today appointed a panel of experts to advise him on accountability issues relating to alleged violations of international human rights and humanitarian law during the final stages of the conflict in Sri Lanka that ended last year.

The three-member panel will advise Mr. Ban on implementing the commitment on human rights accountability made in the Joint Statement issued by the Secretary-General and Sri Lankan President Mahinda Rajapaksa after the UN chief visited the island country in May 2009.

Indonesia’s Marzuki Darusman will serve as the chair of the expert panel, and the other two members are Yasmin Sooka of South Africa and Steven Ratner of the United States. The panel is expected to wrap up its responsibilities within four months of starting work.

The experts will examine “the modalities, applicable international standards and comparative experience with regard to accountability processes, taking into account the nature and scope of any alleged violations in Sri Lanka,” according to a statement issued by Mr. Ban’s spokesperson.

“It will be available as a resource to Sri Lankan authorities should they wish to avail themselves of its expertise in implementing the commitment. In the conduct of its mandate, the panel hopes to cooperate with concerned officials in Sri Lanka.”

Government forces declared victory over the rebel Liberation Tigers of Tamil Eelam (LTTE) last year after a conflict that had raged on and off for nearly three decades and killed thousands of people. The conflict ended with large numbers of Sri Lankans living as internally displaced persons (IDPs), especially in the north.

Today’s statement stressed that Mr. Ban “remains convinced that accountability is an essential foundation for durable peace and reconciliation in Sri Lanka. Through the panel the Secretary-General expects to enable the UN to make a constructive contribution in this regard.”

Last week B. Lynn Pascoe, the Under-Secretary-General for Political Affairs, visited Sri Lanka and held talks with Mr. Rajapaksa, senior Government officials, Opposition leaders and representatives of the Tamil and Muslim communities and civil society groups. He also visited conflict-affected areas where IDPs are being resettled.

Mr. Pascoe said that political solutions that tackle the underlying grievances which fuelled the conflict are necessary to heal the wounds left by the civil war.