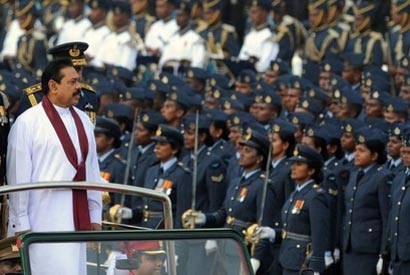 COLOMBO (AFP) – Sri Lanka accused the United Nations on Wednesday of a “hidden agenda” behind its plans to investigate alleged human rights abuses by soldiers in the final months of the island’s savage civil war.

UN Secretary-General Ban Ki-moon’s appointment of a panel to advise on any violations of international human rights was “an attempt to provide oxygen” to the defeated Tamil Tigers, government spokesman Keheliya Rambukwella said.

Sri Lankan troops finally wiped out the separatist guerrillas in May last year after decades of ethnic bloodshed, and the government has denied repeated allegations that thousands of civilians were killed in the fighting.

“The United Nations and its secretary-general have revealed their hidden agenda in no uncertain terms,” Rambukwella said in a statement.

Rambukwella did not elaborate on the UN’s “hidden agenda,” but in the past Colombo has portrayed detractors of the war as Tiger sympathisers.

The foreign ministry warned that the panel could be exploited “by vested interests hostile to the process of reconciliation.”

Sri Lanka is extremely sensitive about criticism of its hardline war policy, which it views as having successfully brought peace to the island.

Rambukwella also said the UN was attempting to pre-judge Sri Lanka’s own system of probing the final stages of the fighting through a “lessons learnt” commission appointed by President Mahinda Rajapakse.

“The UN Secretary-General has appointed a three-member panel ignoring the wishes of a member state,” Rambukwella said. “Sri Lanka will take appropriate action,” he added, without giving further details.

Ban’s move followed international pressure for an independent probe into allegations that thousands of ethnic Tamil civilians were killed by government troops and that surrendering rebels were executed in cold blood.

UN spokesman Martin Nesirky said in a statement Tuesday that the panel would be chaired by Marzuki Darusman from Indonesia, the UN’s special envoy for North Korea, and hoped to complete its work in four months.

Nesirky emphasised the group had a mostly consultative role, and that “primary responsibility for investigating rests with the authorities of Sri Lanka”.

However many diplomats see Ban’s panel as a precursor to a full-blown war crimes investigation.

Rajapakse has always rejected calls for a probe and in March warned Ban that he would take “appropriate action” if a UN panel was set up.

Sri Lanka managed to stave off censure at the UN Security Council last year thanks to the support of Russia and China, close allies and key suppliers of military hardware to the island.

The government last week held official celebrations of the Tigers’ defeat, with Rajapakse delivering a speech insisting that his soldiers did not kill a single civilian.

“Our troops carried a gun in one hand and a copy of the human rights charter in the other,” the president said. “Our guns were not fired at a single civilian.”

But many rights groups as well as the United States and the European Union have said the allegations are credible and worth investigating.

The UN itself has said that at least 7,000 Tamil civilians perished in the first four months of last year, just before the government claimed final victory over the Tigers.

The military has also been accused of executing rebels as they surrendered after being trapped on the island’s northeast coast.

Videos, photographs and satellite images presented by human rights groups as evidence of war crimes have been rejected as forgeries by Colombo.

The Tamil Tigers had been one of the world’s most effective guerrilla groups, and as recently as 2006 they controlled one-third of Sri Lanka.