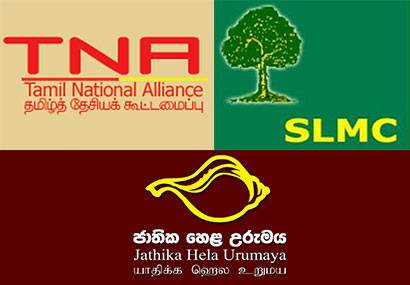 There are 64 registered political parties in Sri Lanka of this number 22 parties carry ethnic-based political names. 15 of these parties carry a separatist Tamil agenda. With the cleansing of LTTE as well as the current global proscription on LTTE fronts should the leaders not take a stand on denazifying the Eelam name and ban its use? If the country is to create a national identity and people to learn to live, be proud and protect Sri Lanka as their nation the impediment is political parties that push for agenda-based slogans dividing people and creating tensions amongst people. We cannot expect to create people like Sir Ponnambalam Ramanathan or Sir Razick Fareed from the current set of ethnic based minority political parties that prevail.  The Muslim Congress and the Tamil National Alliance have shown that they are not national minded except opportunists willing to sell their own people to bring selfish political advantage to themselves. They neither have political backing nor the people’s blessings though they use the minority status to make horse deals for themselves or go crying to Navi Pillai when their tantrums are not met.

To have national unity or reconciliation how can such be possible when there are political parties peddling people to push ethno-religious slogans? In terms of practicality there can be no national reconciliation when several agendas are running in opposite directions especially when the international community’s see and benchmark the faults of the government only.

It may suit these leaders who carry these ethnic-based names to further their political careers but the people should no longer be fooled. For Tamils and Muslims to come out of the “minority-thinking” mentality and disassociate themselves from thinking they are “separate” the removal of these “ethnic-based” names is essential. Similarly it is anticipated that the 3 Sinhala parties also understand this need and change their names as well. Even in Africa ethnic-political parties are banned on the argument that democracy is equated with multi-party politics. No one’s right to take to politics is denied only that they cannot promote ethnic politics under an ethnic-based political party.

The TNA and Muslim Congress have a history of creating mischief in the country and amongst its people. The actions of its leaders over the years have shown the low levels they would stoop to simply for their own advantage.

We have lost count of the times that the SLMC leaders have crossed from one political party to the other and shows the unprincipled nature of the leader and this kangaroo practice has nothing to do with carrying out the wishes of his people. Inspite of all these traits Governing political parties end up giving portfolios like the Justice Ministry and when he says he could not ‘protect his people’ it resonates how unfitting he is for a role like Justice and questions the country’s leaders on why they continue to tolerate to keep him.

It is just the same with the TNA – with evidence of LTTE links, promotion of confederacy in Sri Lanka, propagating separatism overseas it is nothing but lethargy that stops legal actions against them when legislation is very much in place to charge them under the 6th amendment.

It is because of ethnic-based political parties that we have distanced ourselves from appreciating, acknowledging and remembering people like Sir Ponnambalam Ramanathan.

Sir Ponnambalam Ramanathan – Called the ‘greatest Ceylonese of all times’ by D. S. Senanayaka while Sir Baron Jayatilake called Sir Ponnambalam the ‘greatest man Ceylon has produced during the past 50 years’. He was a lawyer, philosopher, statesman, a devout spiritual speaker, legislator who championed the causes of ALL communities.

It was Ponnambalam Ramanathan who was responsible for declaring Wesak as a public holiday just as it was Lakshman Kadiragamar who ensured Wesak was declared a UN holiday. Ponnambalam Ramanathan promoted Buddhist education in schools so much so that Sir Henry Olcott declared ‘From the time Buddhists of Ceylon began to take into their own hands the education of their youths, we have had a staunch friend and co-operator in the person of my friend Mr. Ramanathan, the Solicitor-General of Ceylon’.

Quoting Sir Ramanathan “Take the Sinhalese nation. I have served the race all my life. In my twenty-eighth year I entered the Legislative Council and never once have I thought myself to be a member of the Tamil community only — I supported the Sinhalese interests and every other interest and treated every subject with the same sympathy and desire to do the best for all communities. I knew through and through the men and women of the Sinhalese community of all classes. They have all the characteristics of a great people. They are decidedly considerate and peaceful.’

The Sinhalese must be grateful for how Sir Ponnambalam travelled by ship to England to speak on behalf of the biased stand taken by the British during the Sinhala-Muslim riots of 1915 and met the Secretary of State for the Colonies in London as well as British Parliamentarians and politicians and was responsible for recalling the Governor and the British Army Brigadier from Ceylon while releasing all the imprisoned Sinhalese.

This magnanimous gesture won Sir Ramanathan a hero’s welcome with men drawing his carriage (not horses) to his residence in Ward Place as a mark of gratitude. Some of the elite Sinhala men drew the carriage to show gratitude and that is the essence of living as one community. Not the sham pictures that the UN/NGOs and Navi Pillai’s office are showing us as national reconciliation.

Our next example is Sir Razik Fareed, a Muslim who placed the community before self not looking for position but the future of the next generation. He held positions in the Colombo Municipal Council, was elected as a Senator and held the Ministerial portfolio of Trade under caretaker government of Prime Minister Dahanayake. He stood against communal politics and claimed that Muslims should identify with the national parties and stand by the majority community in resolving common matters.

The recent comments by Dr Ameer Ali former advisor to Howard Government in Australia  is poignant as he is of the opinion that Muslims have played pragmatic politics in the past by joining national parties and have achieved political gains for their community. He however says that the advent of the Sri Lanka Muslim Council (SLMC) as unnecessary and counterproductive. His conclusion “Ethnic politics is the bane of this country”.

An interview with a Sunday newspaper revealed his sentiments which are shared by Muslims and non-Muslims alike.

Extremism in any form is not healthy & we should have understood this after three decades of LTTE terror.

The Government needs to take stock of the situation. There is a problem. Enough of people have given them lists of what the problem is. These lists should be enough to take a firm stand on matters. Let us remind politicians that they neglected LTTE terror, dragged it for 3 decades until they were pressed to take a military option. The country does not need another bloodbath. We do not need nosy parker foreign advisors to tell us how to run the country and the Sri Lankan media must stop stirring trouble to sell their newspapers. A media that did not campaign against the LTTE except report all of LTTE’s gruesome terror has by its own stand shown it is neither interested in peace and harmony in the country nor willing to use the power of medium to promote such. Sri Lanka’s newspapers have failed the nation and its people. Inciting people and communities is immoral and editors in particular need to play a more mature role as do the owners of these newspapers.

It is now time to identify the mischief makers and take action against them for no national reconciliation will work when they hold the forte and influence the decisions.