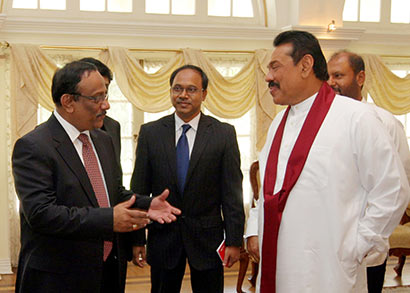 “I am very impressed and pleasantly surprised by Sri Lanka’s rebuilding, reconstruction, rehabilitation, resettlement and development targets achieved since the end of the war” said Mr Haque. “We stand by our Sri Lankan brothers on the issue of human rights,” he further stated.

During the meeting with the President, Bangladeshi Foreign Secretary Shahidul Haque briefed President Rajapaksa on ongoing collaborations and potential new sectors of cooperation.

It is a timely important visit made by the Bangladeshi delegation because of the Commonwealth Ministerial Action Group (CMAG) is due to meet in London on Friday 26 April to discuss many issues related to the Commonwealth. Bangladesh is also a member of CMAG and will chair the meeting. The other current membership of the group is- Australia, Canada, Jamaica, Maldives, Sierra Leone, Tanzania, Trinidad and Tobago and Vanuatu.