Bank of China opens in Colombo 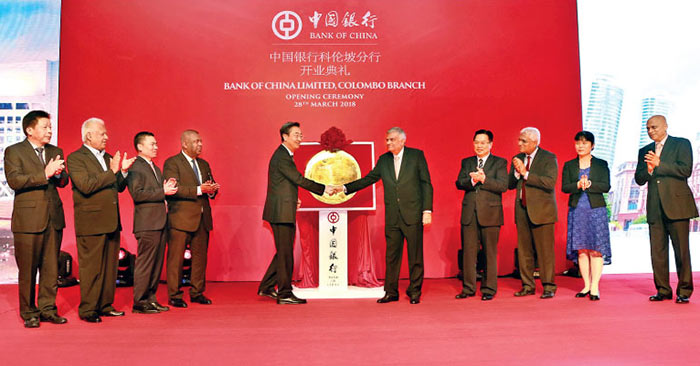 The Bank of China has an important role to play in making finances and credit available to Sri Lankan enterprises that operate in the country. Bank of China can bring more and more Chinese investments in to Sri Lanka, Prime Minister Ranil Wickremesinghe said.

“We need the fullest support from the Bank of China.The bank’s presence here in our country will be the strength for us to become the financial centre,” the PM said speaking at the opening of the Bank of China at Shangri-La hotel on Wednesday.

“We have been able to build a stronger economy during the past three years.The Bank of China is the fourth largest bank in the world and the bank has come to Sri Lanka to commence its business. It’s a new chapter in the modern economic history of Sri Lanka and China.”

“The common understanding between the two countries has grown much more and the One Belt One Road (OBOR) Initiative proposed by China and the hub of the Indian Ocean was proposed by Sri Lanka,” Prime Minister Wickremesinghe said.

“We in the last three years have also taken major steps to ensure that Sri Lanka’s economy developed and became much stronger.We are open to the world.”

“We have developed the Colombo Port and now we are developing the Hambantota Port as a joint venture between the Sri Lanka Ports Authority and China Merchant Holdings.This is just the beginning of a larger area of economic cooperation, as Chinese investments are coming and other investments are coming into our country. “

“This is why we have now taken the step of entering in to a Free Trade Agreement (FTA) with China in addition to what we have with Singapore and deepening the FTA with India, who are the largest markets.Then we will be accessible from Sri Lanka in addition to the European Union where we will have access to under the GSP plus,” the Premier said.

Chinese Ambassador Cheng Xueyuan reiterated that Sri Lanka and China together form a robust partnership to augment world trade and commerce. “We are seeing a new era dawn for Sri Lanka, strengthening the relations the two countries have had both culturally and commercially for centuries. As Bank of China makes its mark in Sri Lanka, not only will it pave the way for numerous opportunities in developing trade and commerce between the two countries but will also pave the pathway for Sri Lanka to achieve its goal as the international finance and logistics hub for this region.”

Chairman of the Board of Supervisors of the Bank of China Wang Xiquan said, “We are enthusiastic about this new chapter we are inking with Sri Lanka.This will not only support the Sri Lankan Government’s infrastructure development initiatives but will also strengthen Sri Lanka’s economy through Chinese investment. Our ultimate mission is to ensure that our clients succeed and that benefits accrued will permeate to all stakeholders.”

Sri Lanka becomes the 54th country in the world to join the world’s fourth largest bank.The Bank of China’s total assets posted at US$ 2.7 Trillion in 2016. “US$ 80 million will be invested in Sri Lanka,” an official of the Bank of China said.