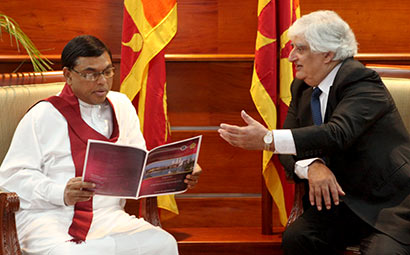 The delegation is in Sri Lanka on a seven day visit  to discuss preparatory arrangements for the CBF to be held with the overarching theme ‘Partnering for wealth creation and social development: the Commonwealth, Indian Ocean and SAARC’ in Colombo on the sidelines of the Commonwealth Heads of Government Meeting (CHOGM) in November 2013. The launch for the Commonwealth Business Forum 2013 will be held under President Mahinda Rajapaksa’s patronage.

The minister was also of the view that non-Commonwealth countries, especially in the Indian Ocean region, should be invited for this Forum as it would be beneficial to all participants.

Minister Peiris observing that the thematic context of the Business Forum should have a direct bearing and relevance to Sri Lanka as the country emerges from the shadow of the terrorist conflict, encouraged a specific emphasis on the youth, particularly in rural areas.

He said that the educated and highly skilled Sri Lankan workforce was already a source of pride and enabling the youth to obtain the maximum benefit from such opportunities afforded by local and foreign investment and international business events, would further strengthen the reservoir of human resources in the country.