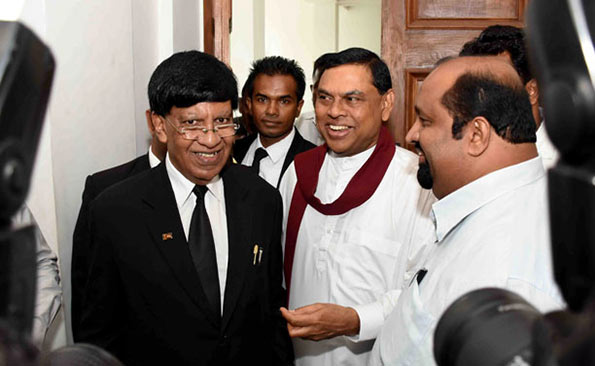 Former Minister Basil Rajapaksa, who was arrested by the FCID this morning, has been released on bail after being produced at the Matara Magistrate’s Court.

He was ordered released on a cash bail of Rs 50,000 and three personal bails of Rs 1 million each.

Matara Magistrate Yuresha de Silva also ordered the former Minister of Economic Development to appear before the FCID on every Sunday.

The Financial Crimes Investigation Division (FCID) arrested Basil Rajapaksa today after he arrived to give a statement regarding a land issue in Matara.

Basil Rajapaksa was previously arrested by the FCID in April last year on alleged financial misappropriations in the Divi Neguma Department.

They were released on bail on June 15, 2015 while the case is still pending in the Kaduwela Magistrate’s Court.

4 Responses to Basil released on bail