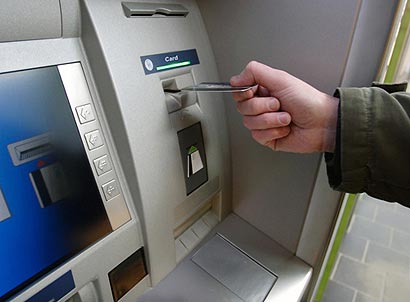 On the night of March 4 (Thursday) 2010 around 9.45 p.m I used the HNB ATM machine situated next to the Bible Society in Colombo-03. I inserted my Nations Trust Bank ATM card (cirrus) into the machine to withdraw Rs.10,000/=. The words “Transaction in progress” appeared on the screen. A few seconds later the card was ejected with the message on the screen “insert card”. I tried twice and had the same results.

I then informed the security officer on duty and called the HNB hotline. The customer care assistant informed me that nothing could be done until the next morning and to report this matter to the person in charge of ATM at the same branch.

I then proceeded to Wellawatte Nations Trust Bank situated close to vaverset Place and took a mini statement which indicated that Rs.10,000 had been debited from my account and further Rs.150/- has been debited as service charge. Service charge is charge only if the card from one bank is used in another bank.

Accordingly, on the morning of 5th March 201o, I called HNB Kollupitiya office on 0112576763 and was assisted by a Lady officer Ms.Marina who took all the details and she called me within an hour and informed me that her records indicated that my card was inserted (card number was given) and that the cash was not dispensed and that the records indicated “TRANSACTION INCOMPLETE”.

I then called Nations Trust Bank, liberty Plaza Branch on 114720923 and informed Ms.Tanoja who said she would report the matter to the head office.

Until evening each of the banks were blaming the other. But as a Customer I suffered the loss of Rs.10,000/=. I was advised by the HNB ATM Officer that I had to wait until they count the ATM Cash at 3 p.m. and at 4.30 p.m. she called to say that there was no cash and that the HNB did not dispense the cash. So, whilst on hold, I called the Nations Trust Bank (liberty Plaza) and an able young man called Asanga answered the queries and said something will be done.

At around 5.39 p.m in the evening I called the Nations Trust Bank and Mr.Asanga answered the phone at Liberty Plaza Branch and informed me that the cash has been credited to my account.

I had to waste so much money on telephone calls, my daily routine was disturbed and time wasted.

I now recall that there have been instances that I have lost a colossal amount of money operating ATM machines and it went unnoticed.

Banks have our monies. They owe a duty to their customers by providing good service. Consumers Beware. Report any irregularity to the appropriate Authorities and the Consumer Affairs Authority.

ATM to me now is A Tricky Machine.

8 Responses to Beware of using ATM Machines in Sri Lanka