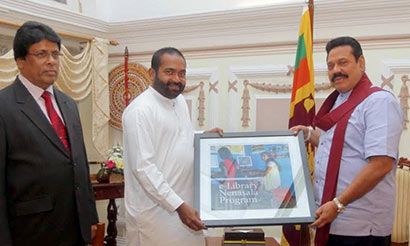 Minister of Telecommunications and Information Technology Ranjith Siyambalapitiya officially handed over ro President Mahinda Rajapaksa, the award received from the Bill and Melinda Gates Foundation’s 2014 for Sri Lanka’s e-Library Nenasala Programme at Temple Trees Thursday (21). The Secretary to the Ministry Gotabhaya Jayarathana was present at the occasion.

Sri Lanka’s e-Library Nenasala Programme (eLNP) won the Bill & Melinda Gates Foundation‘s 2014 Access to Learning award of $1 million at a ceremony held in Lyon, France Monday (18).. The award was in recognition of eLNP’s thrust for providing free access to computers and the Internet to underserved Sri Lankans living in remote and rural areas. The Government of Sri Lanka launched the programme as a way to boost digital literacy and encourage economic development throughout the country based on its National Development policy “Mahinda Chinthana”.

A notable feature was the winning of the first place by the Nenasala Project from among 150 Projects launched in around 110 countries.

The eLNP’s centres, known as Nenasalas (wisdom outlets), have helped Sri Lanka increase its computer usage and IT literacy rate from below 10 percent in 2004 to almost 40 per cent today. Centres are located in rural areas to give residents increased access to high quality equipment, training, and locally tailored information to help them improve their lives. Microsoft, a foundation partner, will make available a donation of software to eLNP, It wll be offered as part of its commitment to bring the benefits of relevant and accessible technology to local communities around the world.

The majority of the Nenasalas are located within religious institutions, which have served as community centres and places of learning for centuries. This strategy has helped the Government earn the confidence and trust of Sri Lanka’s rural residents, who have had little access to technology to date. Whether housed in a Buddhist temple, Hindu kovil, Muslim mosque, or Christian church, each e-Library Nenasala is free and open to people of all religions and income levels.

In addition to access, the centres provide training to help people acquire basic computer and Internet skills, and the know-how to use email and social media platforms. Local youth often become volunteer computer trainers at the Nenasalas and are given basic training at the beginning of their service. Their skills are further enhanced through refresher courses, online training programmes, and peer to peer learning opportunities.

Nenasalas also provide extensive learning opportunities for school-age children, including a video-based programme for learning English. Women are given specialized content on critical issues facing children and families, including information on nutrition, breast-feeding, safe sanitation, and vaccines. Adults can perform job searches, learn how to create a resume, and access a wide variety of Government services, including passport applications, driver’s license renewals, and Government exams. Migrant workers who make up a significant portion of the Sri Lankan workforce can communicate via Skype with family members they leave behind.

eLNP is an ICTA project forming part of a larger country-wide strategy to “take the dividends of ICT to every village and every citizen.