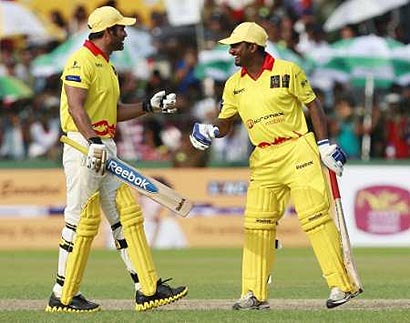 “Being able to play with Sanga, Murali, Sanath and Aravinda I think is an absolute dream,” said Shetty who showcased his batting ability with a six against Muralitharan, the world’s leading wickettaker in his first match score of 26.

“A brilliant cause we are all here for.”

Sabbas Joseph, director of Wizcraft International which owns IIFA, said the proceeds from the cricket will be split between “Cricket for Children,” an initiative by the U.N. Children’s’ Fund and Sri Lanka Cricket that helps former child soldiers, and Habitat for Humanity to build homes for 100 families in the island’s war-torn north.

Thousands of fans thronged Colombo’s Sinhalese Sports Club ground for an evening of cricket and music.

Sections of the Indian movie industry called for a boycott of IIFA’s Sri Lanka events over allegations that Sri Lankan troops killed thousands of ethnic Tamil civilians in the final stages of the civil war last year.

The protesters are from the southern state for Tamil Nadu who have linguistic and family ties with Sri Lanka’s Tamils.