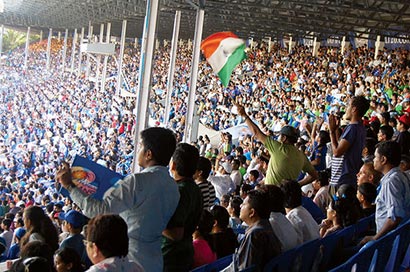 MUMBAI: Bookie Sonu Yogendra Jalan alias Malad has told the crime branch that he paid Rs 10 crore to a Sri Lankan cricket player for fixing a match. He also mentioned that some Indian cricketers were also involved in match fixing, sources said.

He along with Devendra Kothari alias Bhaiyyaji, were arrested by the city crime branch on Thursday. They are believed to be a part of a bigger international cricket betting racket, crime branch officials said.

The property cell of Mumbai crime branch on Thursday raided a building at Lokhandwala in Kandivli and busted a major cricket betting racket. Police arrested Kothari, Jalan and two others and seized two laptops, voice recorders, computers, 25 mobile phones and cash of Rs 5.18 lakh. All the accused were booked under prevention of gambling act and were remanded to police custody.

Sources said that Kothari and Sonu Jalan’s betting network, whose turn over is around Rs 500 crore a month, is controlled by a Pakistan-based gang belonging to Chhota Shakeel. Sonu Jalan was arrested last year from Andheri in another case of gambling by the Social Service branch. Kothari was also an accused in that case and was not traceable.

In the fresh case, Kothari and Jalan had clients and punters in Afghanistan, Pakistan, South Africa and Saudi Arabia. In India, the gang has their associates in Delhi, Kolkata, Rajasthan, Gujarat and Haryana.

“We had information that the gang was accepting bets on the IPL matches. Based on the information, we have arrested them. The gang is well-organised with having all the betting assessment software with them which helps them in managing their betting business” said Deven Bharti, additional commissioner of police.

The gang also asked their member or associates to open an account with the official UK betting site Betfair and passed on the passwords to Sonu and Kothari, who accessed it, found out the rates and accepted the bets accordingly. One cannot place on line bets on Betfair in India as betting on sport is illegal here.

Sonu, while in custody, had earlier told the police that he had paid around Rs 1 crore to an IPS officer for not arresting him. But he was arrested. He had threatened to lodge a complaint with the state anti-corruption bureau, but went on the backfoot after another senior IPS officer intervened.