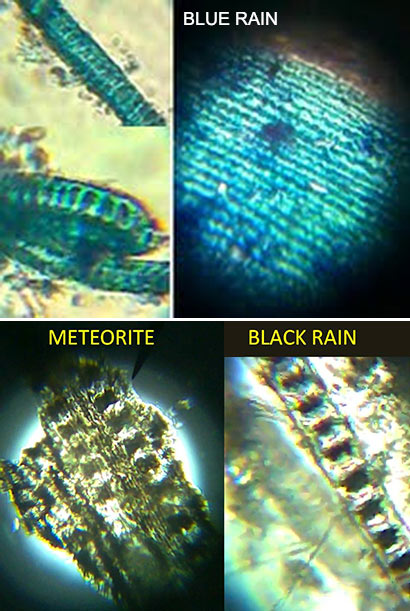 In several research papers submitted Professor Chandra Wickramasinghe and his team have revealed along with fossilised ancient diatoms as reported earlier several living diatoms or algae were also discovered in the sterile inside of a meteorite that fell in the village called Rakkinda near Mahiyangana in the Uva Province of Sri Lanka.

The scientists added that the blue rain and black rain collected in Vavuniya and Meegahapitiya  near Mahiyangana had similar structures of diatoms of the same colour  present in the live diatoms found in the Rakkinda meteorite.

Wickramasinghe provided this correspondent with all scanned electronic microscope images making it easy for any layman to observe the similarities of structure between ones found in the coloured rain as well as inside the meteorite.

Earlier the scientists found live algae both in the yellow rain and inside the  Polonnaruwa meteorite.

Chandra Wickramasinghe told this correspondent, “The fact that coloured microorganisms are present in the coloured rain as well as in the meteorite that fell a week or two earlier is highly significant.  It is probable that disintegration of a fraction of the incoming meteorites led to microorganisms being dispersed in the clouds, and these microbes served  to seed the rain clouds.  The couple of weeks delay between the rainfall event and the meteorite fall is exactly what is expected on this basis. I think this is clear proof of ongoing panspermia.”

Panspermia is a theory that tells life arrived on planet earth hitchhiking on comets.

Many also said in the Sri Lankan evidence provided by Chandra Wickramasinghe and team. for the first time in concrete evidence that man is understanding that he is not alone in the universe.  Wickramasinghe is the main proponent of the theory that life arrived on planet earth hitch hiking on comets from far corners of the universe.

The above are details of the samples examined by the scientists.  The distance between the site of the black rain and the meteorite fall in the chart below is approximately 25 kilometers.

“Whilst we cannot rule out the possibility that the microbes in the blue and black rain were lofted from the ground and returned with the rainfall, the presence of strikingly similar microbes in sterile interior extracts of the Rakkinda meteorite (Fig.4) militates against this option. We conclude that the meteorite parent bodies carried these microorganisms that were dispersed into the tropospheric clouds a week or so earlier to serve as freezing nuclei.(troposphere is the lowest part of the earth’s atmosphere)  The possibility of ongoing panspermia (Hoyle and Wickramasinghe, 2000) emerges as most reasonable option, in our view.”

The following are the figures provided with the paper: 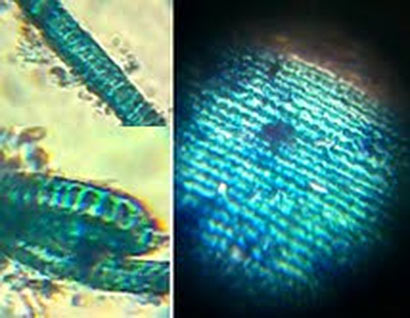 Fig.4  Microorganisms found in the Black rain and in the meteorite.  Bar represents 10μm. 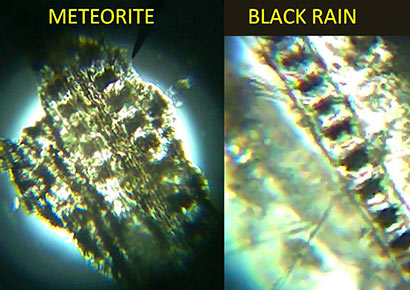 On finding live diatoms inside the Polonnaruwa meteorite the scientists said:

“The surface of a meteoritic stone was sterilised and a sterile wide-bore hyperdermic syringe inserted into a depth of about 2-3 cm into its interior. By this means a small quantity of fine powdery material from the interior was extracted and dispersed onto a drop of sterile distilled water on a sterilised microscope slide. Examination under a light microscope showed a range of diatoms exhibiting motility as well as evidence of chlorophyll-containing chromophores”

They added, “To rule out contamination as the explanation of the results in Fig. 2 we have subjected the soil 10 cm below the collection site to the same SEM and optical microscope examination. The negative results obtained so far in this control experiment gives us confidence to conclude that the living diatoms are indigenous to the meteorite and were not introduced from the surrounding soil.”

The scientiststs said, “A variety of pigmented microorganisms have been identified in the red, yellow, blue and black rain that fell over Sri Lanka in December 2012 and January 2013.  There is tentative evidence for the presence of similar organisms, including diatoms, in meteorites falling over the same time period.  These microorganisms are likely to have served as nuclei for the condensation of rain drops.”