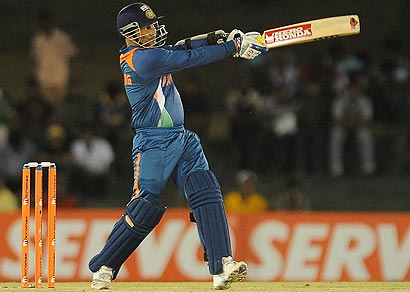 India’s bowlers and Virender Sehwag led the recovery from a dispiriting defeat against New Zealand, helping their team overpower Sri Lanka and secure a bonus point to leave each of the three sides with a win at the end of the first round of matches. MS Dhoni’s luckless run at the toss continued, but Kumar Sangakkara’s decision to bat gave India first use of favourable conditions on a breezy, overcast Dambulla day and their bowlers cashed in. Sehwag then followed up with a steady innings that released the pressure created by early wickets and steered India to what was, in the end, a comfortable win.

The ease with which India completed their win was in contrast to the struggle at the start of the innings, when batsmen found it difficult to negotiate the swing and movement their own seamers had troubled the hosts with. Dinesh Karthik’s edginess at the crease gradually developed into visible frustration and the one delivery he could have dispatched with ease, he slashed straight to third man. India’s two competitors for a middle-order slot, Virat Kohli and Rohit Sharma, followed in successive overs and it appeared the Sri Lankan seamers had set up a low-scoring thriller.

The wickets falling at the other end prompted Sehwag to restrain himself, except against a couple of free-hits. He reserved punishment for deliveries that were over pitched or wide. Those were a rarity, though, and it was not until the sixth over that he cracked Kulasekara for his first boundary. There was greater reliance on timing and using the pace of the seamers than on raw power: Sehwag’s boundaries down the ground were firm pushes and not flowing drives, and the areas through point and midwicket were pierced with consistency by his favoured cuts and stylish whips.

Sehwag’s recovery effort was supported by Suresh Raina in a half-century stand that infused the innings with fluency. Raina nudged the ball around, and gave the more assured Sehwag a fair share of the strike, before a rush of blood drove him to pull straight to deep square leg with the score on 91.

A flurry of boundaries from Sehwag’s blade, however, crushed any Sri Lankan hopes. Again, it was the loose deliveries that were punished and the momentum had swung India’s way. Suraj Randiv dropped short and was slashed for successive fours, and Mathews doled out long hops, one of which was smashed over the ropes. India were coasting towards victory and Sehwag towards his century, but the end was not without drama. With Sehwag on 99 and India requiring a run for a win, Randiv overstepped by a massive margin, depriving Sehwag of a century even though he was thumped over the long-off boundary.

The ending was as dramatic as the start of the game, when Praveen Kumar castled Upul Tharanga with an outswinger off the first ball of the day. The challenge was thrown at Sri Lanka under cloudy skies and the batsmen struggled against the swing and deviation off the pitch. Mahela Jayawardene showed glimpses of his solidity during his brief stay but was trapped in front by a Praveen delivery that moved back in late. Extra pace accounted for Sangakkara, who top-edged a pull to be caught in the deep. The assurance that featured prominently in his knocks during the Test series was absent during Samaraweera’s stay; the seamers had him hopping around until he almost contrived to spoon a short-of-a-length delivery to short midwicket.

Tillakaratne Dilshan was not comfortable at the crease, but countered the swing better than the rest, whipping Praveen’s inswingers through square leg and then latching on anything short, scoring three boundaries off the pull. He settled in and was at greater ease once the left-arm spin of Pragyan Ojha was introduced, making room to cut from the stumps and maintain a steady flow of runs with Angelo Mathews. But Dilshan succumbed to temptation when the ball was tossed up, and top-edged a slog-sweep to scupper a recovery he had initiated.

Ravindra Jadeja bowled a nagging line and had Sri Lanka in further trouble, dismissing Mathews and Chamara Kapugedera with straighter ones. Though the tail, led by Randiv, resisted, it proved inadequate in the wake of Sehwag’s response.