Glamour, Splendor and Color at Hambantota…. A dream comes true! 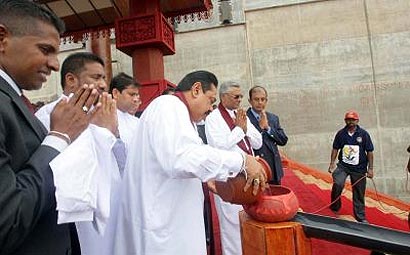 History repeats itself, they say. At times such repetition happens in a different way. Then it adds a new page into history. Dreams they say at times fade away. But, some dreams they say come to stay. Dreams turned into reality have glamour and splendor. Oh….there was a dream of a politician decades ago. He dreamt of a port in Deep South Hambantota. The gentle-man who dreamt this port was a colorful man. He was none other than Don Alwin Rajapaksa, a former Deputy Speaker and Cabinet Minister. In his lifetime, he could not turn this dream into a reality. Yes … he brought forth a son like him into politics. This son reached the highest position in this land.He is President Mahinda Rajapaksa. This like father-like Son, Mahinda Rajapaksa turned his father’s dream into a reality on Sunday (15). He made the dream visible to the nation.

Hambantota, located in the Deep South had been a well known sea port in the ancient history of Sri Lanka. The name “Hambana” was a recorded name of sailing vessels that had been used in the ancient times that frequented many Asian ports. Even the activities of Hambantota as a sea port are mentioned in the R.L.Bohier’s book on Sri Lanka written in the Second Century. Hambantota is situated at closest point to the main shipping route that connects East and West. 200 to 300 ships ply this area daily, and now they call at Singapore and Dubai Ports.

The idea of building a modern port in Hambantota was first mooted by the late Parliamentarian, Hon. D.A.Rajapaksa, father of President Mahinda Rajapaksa. But it did not materialize. The idea came up time to time, raised in Parliament by many MPs. It remained a suggestion but never saw the light of the day due to many reasons. In the meantime, a foreign company which was hired to carry out a feasibility study reported saying the location, Hambantota was not suitable to build a harbor and this brought the whole project to halt.

However, Mahinda Rajapaksa as the Prime Minister then was not impressed by the pessimistic attitude of the report and was determined to overcome the negative reaction and proceed with it.

A new Hambantota port will help relieve pressure on the Colombo port,and also provide services to ships that normally take three-and-a-half day detours from their shipping lanes to receive these services,including refueling, maintenance, logistics and buying provisions and medical supplies Proposals to build a port in Hambantota date back over three decades, but plans never got out of conceptual stages. The Port of Hambantota project was finally launched after Mahinda Rajapaksa, who is a native of Hambantota, was elected President of Sri Lanka in 2005.

Upon becoming President in November 2005 his Hambantota Port Dream was turned into reality. China was chosen to fund the project and that Sri Lanka made an open request for funding and China was the first to respond. The port was built on a 2000 hectares of land and 450 families lived in the area were relocated with payment of adequate compensation.

The Hambantota Port is being constructed by the Chinese companies China Harbour Engineering Company and Sinohydro Corporation. The total cost of the first phase of the project is estimated at $360 million.85% of the funding is provided by the Chinese Government and the remaining 15% by the Sri Lanka Ports Authority.

After overcoming all these obstacles, President Mahinda Rajapaksa addressing the large gathering at the Karadiyawara Mangallaya, the ceremonial sea water intake completing Phase One of the Hambantota Port Development on 15th August wished that “Every drop of water that fills up this great port should dissolve and wipe out the feelings of weakness and inability that once prevailed among us”.

“It is not sea water that will fill this port, but the future prosperity of our nation. From this port will emerge our true economic independence. This a great symbol of our moving away from the days when we said we are unable to develop for lack of funds, to a time when we can show how the country can be developed through our own strength, President stated.

The President pointed out that “We are now engaged in building our future. Ours is the rising economy in Asia. This is our own vision. It

is of our own construction. This new emerging economy will be enriched with a knowledge economy in addition to the physical and infrastructural facilities.”

He added that: “We must announce to the world that this is a massive technological achievement built in Sri Lanka. Therefore, we will not anymore be a nation that is satisfied with supplying only fuel and water to ships. This port must lead to the emergence of tens of thousands of employment opportunities.

We must transform our country as an economic centre that spreads the national brand name “Made in Sri Lanka” throughout the world.… Not only the South, Hambantota, Moneragala and Embilipitiya but the entire Eastern region too will become a single vibrant economic region from these infrastructure developments. This development is not confined to a single region. It will help make the entire country one large economic zone.

“We will build international relations both politically and economically. The step forward that we will be taking as a nation will be one where there will be international economic cooperation built through mutual trust, respect and friendship”, the President said. A large crowd was present in the Port basin to witness this historic moment.

Commenting on Chinese assistance to build the Hambantota Port, the President said: “In the past this country was situated on the Silk

Route. Our country was situated on the route between China and Southern Europe. The offer by China to build this port that was located in the old Silk Route is an act that reminds us again of our traditional friendship.

The primary objective of the Hambantota Port Development was to synchronize the different aspect of development such as shipping,trans-shipment, ship building, bunkering, the handling of large scale fuel products, increased bunkering, and catering to increased exports and imports, for which the Port of Colombo did not have space and facilities.

The mouth of the natural harbour at Hambantota has a 22m depth. When completed, the port will have a 1.5 km long breakwater, with a minimum basin depth of 17m. The turning circle will be 600m. A dam will also be built to prevent flooding in nearby areas, and a seawall made of interlocking concrete blocks will protect the port from high seas.

A $550 million tax-free port zone is being set up outside the port,with local and international companies expressing interest in setting up shipbuilding, ship-repair and warehousing facilities in the zone. The Port is expected to provide 13,000 direct and indirect employments to over 100,000 people

The first phase of the Port will consist of two 600m general purpose berths, a 310m bunkering berth and a 120m small craft berth. It will

also contain a bunkering facility and tank farm which will include 8 tanks for marine fuel, 3 tanks containing aviation fuel and 3 for Liquid Petroleum Gas (LPG). A 15 floor administrative complex is also under construction as part of the project.

The port initially planned as a service and industrial port and subsequently with the objective of developing it transshipment port will help the socio economic advancement of Sri Lanka The bunkering operations will be handled by the SLPA itself while partnerships have been sought with foreign investment to handle port related industries and cargo handling.

The $600 million second phase of the Port of Hambantota project, which will include a container terminal, will be completed by 2014. The third phase will include a dockyard. Upon completion, the port will cover 4,000 acres of land and accommodate 33 vessels at any given time, making it the largest port in South Asia.

The construction of the Port of Hambantota is part of a larger development project centered around the Hambantota District. Apart of the port, the project consists of the construction of an international airport, a highway, a railway, an oil refinery and related facilities.The new airport will initially handle cargo related to the port, with plans for later expansion. Related to the project, a 500-acre Safari Park is being constructed in Ridiyagama ,Ambalantota scheduled to be open in 2011. An international cricket stadium is also under construction in the area, and will host 2 fixtures at the upcoming 2011 World Cup.

The projects have resulted in Hambantota, one of the underprivileged districts in Sri Lanka, becoming the fastest ever developing region in the island.

1 Response to Glamour, Splendor and Color at Hambantota…. A dream comes true!