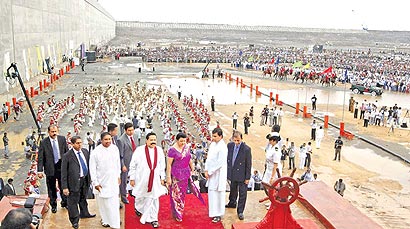 A large crowd was present in the Port basin to witness this historic moment. Once port construction is completed this will be the largest port in the country with facilities to berth mega vessels as the present international port in Colombo cannot cater to larger vessels as its basin is only 15 meter deep.

The opening of this Port is scheduled to take place on November 17. The port initially planned as a service and industrial port and subsequently with the objective of developing it transshipment port will help the socio economic advancement of Sri Lanka

The Port’s first stage was built at a cost 360 million dollars, 85 per cent of which came as a loan from the Export-Import Bank of China as a loan. The balance was financed by Government of Sri Lanka. The first phase of the Port will consist of two 600m general purpose berths, a 310m bunkering berth and a 120m small craft berth. It will also contain a bunkering facility and tank farm which will include 8 tanks for marine fuel, 3 tanks containing aviation fuel and 3 for Liquid Petroleum Gas (LPG). A 15 floor administrative complex is also under construction as part of the project.

According to SLPA Chairman Dr. Priyath Bandu the bunkering operations will be handled by the SLPA itself while partnerships have been sought with foreign investment to handle port related industries and cargo handling.