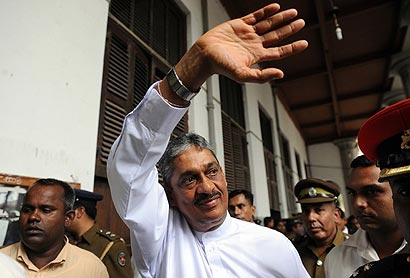 General Sarath Fonseka to be cashiered from SL Army

The convening officer of the Court Martial – 1, HE the President Mahinda Rajapaksa as the Confirming Authority on Saturday (14) confirmed the accused, General G.S.C. Fonseka be cashiered from the Sri Lanka Army as recommended by the tribunal that probed the accused’s involvement in politics on three separate charges.

2. Neglect to obey garrison or other orders (two counts)

The Court Martial – 1 probing charges against General Sarath Fonseka under three separate charges commenced its sittings for the first time on 16th March 2010, in accordance with provisions in the Army Act after it was appointed by HE the President Mahinda Rajapaksa on 11th March 2010 as Commander-in-Chief of the Armed Forces on recommendations of the Commander of the Army Lieutenant General Jagath Jayasuriya.

General G.S.C Fonseka joined the Sri Lanka Army on 5th February 1970 and received commissions as a 2nd Lieutenant on 1st June 1971 in the Sri Lanka Sinha Regiment. Months after HE the President was elected, he was appointed the Commander of the Army on 6th December 2005. He was promoted to the Rank of a General on 18th May 2009 immediately after the conclusion of the war for peace. On 14th July 2009, he was appointed to the post of Chief of Defence Staff and he retired from the service on 14th November 2009.