Boys will be boys, says Keheliya 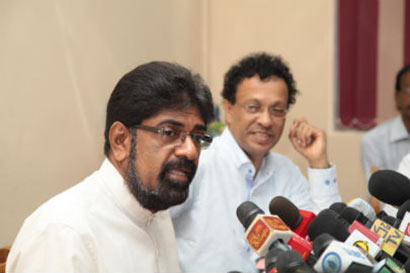 “Even the politicians’ sons will behave like boys; if someone hits them they will hit back,”  said Minister Keheliya Rambukwella at the Cabinet news conference yesterday.

In reply to a question by the media, the minister said that boys quarreled and fought among themselves, He said this happened everywhere and not only in Pasikudah. He said the one who is injured goes to hospital and the one who assaulted goes to the police. However this incident had received much publicity which he regretted, he said.

The following are some of the replies the minister gave when questioned by several media persons:

Q. In an incident of this nature, when the victim is in the accident ward, a suspect cannot be enlarged on bail. But bail had been granted to the son of Maithripala.
A. The point you have raised is about the granting of bail. Why cannot bail be allowed? There have been instances where bail has been allowed. Another point is that if someone wants to send another to the remand, he seeks resident treatment at the accident ward. The decision to grant bail or not depends on the decision as to whether a suspect can be produced before a court. If a judge decides to recall him before the law and, depending on legal arguments, he may be allowed bail.

Q. But in this case he had been allowed police bail.
A. So what?

Q. If the children of politicians behave decently and in a law abiding manner this type of situation would not have arisen.
A. A very good point, and in reply will ask you, if someone assaults a person while walking on the road can he ignore it because he is the son of a politician. Do you want him to look the other way and go? Boys are boys whether they are the children of politicians or not. Have you forgotten your boyhood?

Q. It seems that Minister Maithripala is pointing an accusing finger at the government; he had said that if you remove one brick the government would fall.
A. Will those in the government remove their own bricks? Extraction of teeth and removal of bricks are the work of outsiders — because they are the ones who want the government to fall. He would have pointed at them.

2 Responses to Boys will be boys, says Keheliya