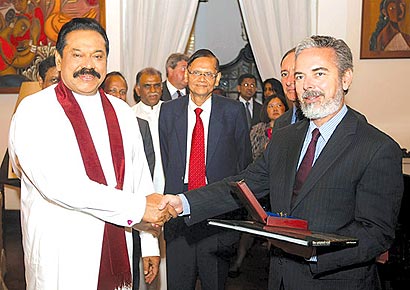 Brazil acknowledged the significant post-conflict progress made by Sri Lanka on many fronts and admired President Mahinda Rajapaksa’s success in combining economic progress with equity and human and social development.

This was stated by Brazil’s External Relations Minister Antonio Patriota when he paid a courtesy call on President Mahinda Rajapaksa at Janadhipathi Mandiraya yesterday morning.

Acknowledging the importance of the first ever high-level official visit to Sri Lanka by a Brazilian External Relations Minister, President Rajapaksa apprised the Brazilian Minister of the post-conflict reconstruction in Sri Lanka including the rehabilitation and reconciliation aspects.

The President also highlighted that with the re-establishment of security and political stability, Sri Lanka has already recorded an economic growth of eight percent, initiated a major infrastructure development drive, and expanded its potential as a manufacturing base, a target for inward investment, and a tourist destination.

The Brazilian Minister conveyed the felicitations of Brazil President Dilma Rousseff to President Rajapaksa on the restoration of peace and stability in Sri Lanka.

President Rajapaksa stated that his vision is to transform Sri Lanka into a major regional hub for energy, knowledge, maritime services, aviation and tourism.

President Rajapaksa also conveyed his appreciation to President Rousseff on the economic stability and social progress achieved by Brazil.

He stated that against this background, the visit by the External Relations Minister provided an opportunity for broadening the fundamentals of the excellent bilateral relations between the two countries.

The Minister accompanied by a delegation of senior officials arrived in Sri Lanka on Saturday for a three-day official visit.

The Brazilian delegation is in the country at the invitation of External Affairs Minister Prof G L Peiris to engage in bilateral discussions between the two countries.