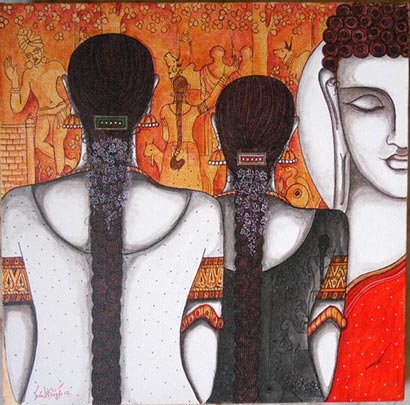 Kappan Kishan is a Buddhist artist from Telangana province of Andra Pradesh, South India. The people from the region like to call their area as the seat of Buddhism in India.

“These women, according to me, are devotees of Buddha. In this series, you can see them painting Buddha. Andhra Pradesh is the seat of Buddhism in India. So, instead of focusing only on Buddha in different stages of meditation, I wanted my paintings to reflect the association with our State,”he told the Hindu’s Sangeetha Devi Dundoo who wrote a review of his exhibition.

The Hindu said , “Kappari Kishan’s series on Buddha is a departure from the oft-repeated visual imagery of Buddha in penance. A follower of Buddhism and its principles, Kappari Kishan wanted to present Buddhism as he discovered it during his growing years in Telangana. As with most artists from this region, he, too, took a fascination to painting women in rural paintings. The inspiration from masters like Vaikuntam is obvious.”

The artist’s new series on Gautama Buddha, now on display at Also, presents Buddha through the eyes of rural Telangana women. “These women, according to me, are devotees of Buddha. In this series, you can see them painting Buddha. Andhra Pradesh is the seat of Buddhism in India. So, instead of focusing only on Buddha in different stages of meditation, I wanted my paintings to reflect the association with our State,” says the artist.

“In almost all his works, you see the women with their backs turned towards you. “I find rural women, with long plaited hair, beautiful,” says Kishan. The paintings are bright, with a diligent use of colours (acrylic on canvas) and are available in different sizes, prized affordably between Rs. 4000 and 20,000. The artist adds variety by mounting a few paintings on wooden frames and one on a box that resembles a treasure chest.”

In the history of Buddhism, Andhra then a maritime power took leading role in the spread of Buddhism to far east. Sri lanka and Andhradesa had close links with each other from ancient times as Dantavamsa and Attakathas testify. In the 14th century, Dharmakeerti, a leading sinhalese thera, affected repairs at the vihara in Nagarjunakonda. About the same time the sinhalese general Senalankadhikara was carrying out renovations to a vihara in kanchipura. These are last records of active Buddhism not only in Andhra but also in the entire south of India. Andhra culture had its influence on Ceylon Buddhism. Chiefly in arts, sculpture and architecture.

Budddhagosha, a revered name in Theravada tradition, was born in 4th century A.D. in planad area of Guntur district, Andhra Pradesh. He wrote a treatise on tripitaka called “VISSUDHIMAGGA”, which is his masterpiece on Theravada tradition.He who translated back the whole Theravadin Tripitaka to Pali from Hela in Sri Lanka.

The last few kings in Sri Lanka like Sri Wickrama Rajasingha came from this region.