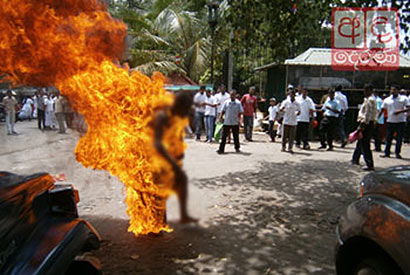 The Buddhist monk who set himself on fire near the main entrance at the Dalada Maligawa Kandy passed away due to injuries at the National Hospital, sources at the hospital stated.

The Buddhist monk who suffered serious injuries after setting himself on fire to protest against the slaughter of cattle was transferred to the Colombo National Hospital.

The Buddhist monk underwent treatment in the Intensive Care Unit (ICU), a spokesman of the hospital said this morning.

Ven. Bowatte Indrarathana Thera of the Sri Sugatha Purana Vihara in Kandy, had doused himself with a flammable liquid and set himself ablaze near the Dalada Maligawa (Temple of the Sacred Tooth Relic) yesterday (24).

Policemen and devotees near the temple doused the flames and rushed the monk to the Kandy Hospital. However, he was later transferred to the Colombo National Hospital via helicopter.

Certain media aired videos of the monk issuing certain demands, such as putting an end to the killing of cattle for meat and Buddhist being converted to other religions, before setting himself ablaze.

Ven. Indrarathana Thera had informed those media of his intentions before committing self-immolation while they had recorded footage of the incident accordingly.

Meanwhile, Kandy Police said they have launched full scale investigation regarding how the Buddhist monk had obtained petrol to immolate himself.

8 Responses to Buddhist monk succumbs to injuries after self-immolation