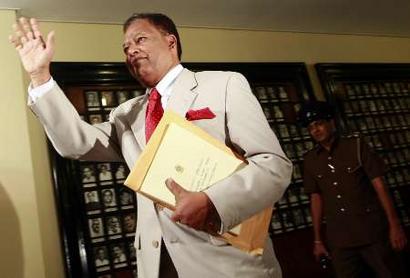 At the start of the presentation, Acting Finance and Planning Minister Dr. Amunugama thanked the people who gave a resounding mandate to President Mahinda Rajapaksa at the Presidential Election concluded in January and the United People’s Freedom Alliance (UPFA) at the General Elections held in April.

He said that the landslide victory given by almost two thirds of the voting population was a clear endorsement of the confidence reposed in the bold leadership of the President who successfully eliminated the LTTE terrorism , restoring peace.

The newly formed Cabinet of Ministers have just begun to assess their scope of work within the context of the Mahinda Chintana -Vision for the Future – the election manifesto of President Mahinda Rajapaksa which has been prioritized to accelerate the post-conflict socio-economic development ensuring better living conditions to all Sri Lankans. Dr. Amunugama said more than 6 percent growth is expected in this year, adding that the 7.1 percent growth rate has been recorded in the first quarter of the current year while the inflation was only 4.6 percent in June.

He said the Budget has given priority to maintain a deficit substantially below last year’s level without disturbing development activities and the public investment of 6.6 percent of GDP is protected.

The entire Government machinery is being reorganized to respond to private sector investment proposals following a medium term road map. Similarly, the Government will closely work with the farming community and other stakeholders to accelerate food production and contribute towards food security and high income generation.

The Government will also strengthen its commitment to provide education, health, assistance to vulnerable groups, the rural community, traditional and small enterprises, public servants and the working population to improve their living conditions in terms of a variety of programs revolving around the proposals in the budget and the medium term road map. Meanwhile, the post-conflict security priority will be devoted to combat crime, underworld operations, drugs and the illicit liquor trade.

The Budget speech introduced a series of measures for the welfare and well-being of school children. It has allocated Rs.7363 million for the provision of free text books, nutritional food, school uniforms, subsidized transport and scholarships to around three million schoolchildren.

Meanwhile,welfare and well-being of the low-income families under the Samurdhi program and expectant mothers, lactating mothers and infants have been ensured through this Budget.

Accordingly, Rs.2500 million has been allocated for the nutritional improvements of 74,000 expectant mothers, lactating mothers and infants while Rs.9,300 million has been provided to extend income support for the low income families.

The Government has given priority for the better living conditions of the displaced people in welfare centres and Rs.7,500 million has been allocated to provide dry rations and food for them.

The Budget paying the highest tribute to soldiers had allocated Rs. 102, 500 million to provide an allowance for around 6,000 disabled soldiers. In keeping with the commitment to provide free health, Rs.13,300 million is secured to supply drugs and pharmaceuticals to around 50 million in and outdoor patients using government healthcare facilities.

A sum of Rs.35,000 million will be provided to around two million farmers involved in higher agricultural production to meet expenditure in respect of fertilizer subsidies, subsidies credit and procurement of paddy at the granted price.