Post mortem of sweep ticket seller to be held tomorrow 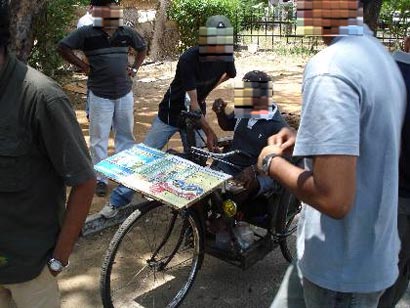 The victim, thought to have been a sweep ticket seller, had sustained severe head injury. It is suspected that the murderers made off with the victim’s cash earnings. A stack of sweep tickets was found with the body, as was a wheelchair.

This grisly discovery follows as many as five similar cases scattered throughout the city. However, Jayakody added that he “had received no information” about the post mortem reports of the earlier victims. He did confirm, however, that all had suffered severe head injuries. Jayakody added that investigations were underway to ascertain whether the latest victim’s death was connected with any of the earlier killings.

Earlier this month, police ruled out the possibility that the spate of deaths was the work of a serial killer. An investigation into three of the victims led to the arrest of a suspect, the police told media. Meanwhile, the police conducted investigations into the remaining unsolved cases.

One of the earlier victims, found near the Gangarama Temple filling station, was also thought to be disabled.