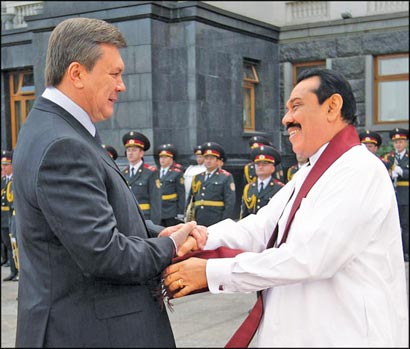 The agreement to promote tourism between the two countries were signed by Sri Lankan Ambassador in Russia Udayanga Weeratunga and Ukrainian Cultural and Tourism Minister Mikhail Kulinyak while the agreement enhancing the defence sector cooperation was signed by Presidential Secretary Lalith Weeratunga and Ukrainian Defence Minister Mykhalio Yezhel.

The other agreements were signed by the high ranking officials witnessed by the Presidents of both countries.

The President stressed that his Government has succeeded in ending three decades long terrorism and separatism by defeating one of the most ruthless terrorist outfits in the world – the LTTE.

He added that Sri Lanka has set an example to the world by launching a humanitarian operation to defeat terrorism.

“We have ensured the protection of civilian lives and their rights while fighting the barbaric terrorists,” he added.

He opined that all communities in Sri Lanka are living in peace and enjoying the fruits of freedom.

He stressed that the Government is in the process of developing the country while mending the broken hearts and minds as a result of terrorism.

The President said that more than 300,000 civilians were displaced by LTTE terrorist atrocities and the Government provided them relief immediately. He said the Government has taken steps to resettle them.

President Rajapaksa added that some pro-terrorist groups have embarked on a disinformation campaign against the country and all should be united to defeat such conspiracies.

He emphasized the need for closer ties between Sri Lanka and Ukraine for the mutual benefits of both countries. “There is much scope for further cooperation in bilateral relations between Ukraine and Sri Lanka. Lanka looks forward towards a post conflict era of stability and progress” , he added.

The President was of the view that Ukraine is poised to achieve rapid economic recovery and modernization, based on Ukraine’s well-known strengths in the scientific, technological, agricultural and industrial sectors.

President Mahinda Rajapaksa on a visit to Ukraine paid floral tributes at the Garden of Eternal Glory built in honour of the dead and missing members of Ukranian armed forces during the Second World War at Kiev.

President Rajapaksa is on a three day visit to the country on an invitation of Ukraine President Viktor Yanukovich. Yesterday, the President paid floral tributes at the monument of the fallen heroes of the armed services, a Presidential Media Division press release said.

The Garden of Eternal Glory was built in 1957 with an eternal flame set up on the memorial and is also the last resting place of 34 national heroes of Ukraine.