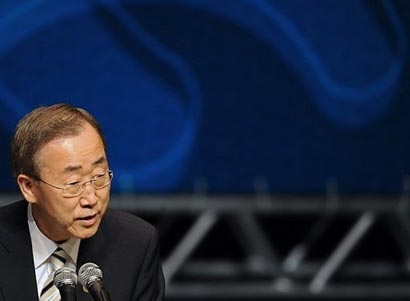 KINSHASA, June 30 (Reuters) – There is no reason for the Sri Lankan government’s angry reaction to the formation of a U.N. advisory panel on possible war crimes at the end of Sri Lanka’s war against rebels, the U.N. chief said on Wednesday.

Last week U.N. Secretary-General Ban Ki-moon named a three-member panel chaired by Indonesia’s former attorney general, Marzuki Darusman, to advise him whether war crimes were committed in the final months of Sri Lanka’s war against the separatists Tamil Tigers, which it won in May 2009.

But Sri Lanka’s government has rejected Ban’s panel and said it would not issue visas to its three members.

“There is no reason why (the) Sri Lankan government (is) reacting negatively to my proposal,” Ban told Reuters in an interview in the capital of the Democratic Republic of Congo, which is celebrating 50 years of independence.

He said Sri Lanka “should take all the measures to make it accountable for all these perpetrators who have committed and violated international human rights and humanitarian law.”

The government had urged Ban not to appoint the advisory panel, saying it had its own commission to investigate possible human rights violations at the end of its quarter century war with the Tamil Tigers.

Ban said now it was the right time for Sri Lankan President Mahinda Rajapaksa “to demonstrate his commitment to the values of human rights.”

Ban’s panel has received the support of the United States, Britain and other countries.

In New York, reporters asked U.N. spokesman Farhan Haq on Wednesday about remarks a Sri Lankan minister made to the local media, where he was quoted as saying that employees of the U.N. office in Sri Lanka should be held hostage until Ban makes a decision to dissolve the panel.

Haq said the government had assured the United Nations that the remarks represented an individual opinion and not official policy. (Writing and additional reporting by Louis Charbonneau in New York; editing by Mohammad Zargham)