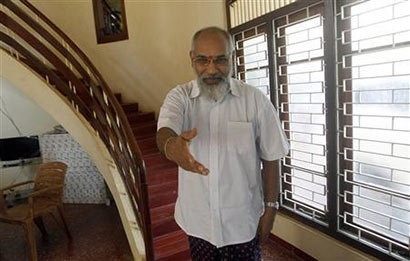 C V Wigneswaran and the TNA need to realize some hard facts. Firstly, C V Wigneswaran is just ONE of 9 Chief Ministers elected to office for a term. He should not think or behave as if he has been elected as the country’s President. The TNA itself known publicly as the proxy of the LTTE is also just one political party of many in Sri Lanka. The President should not fall for the ruses been thrown on some bogey olive branch being offered for the country’s President to go to Jaffna and hand over the letter of appointment to just one of the country’s 9 Chief Ministers when the customary practice is for the Governor to hand over the appointment letters.

The 2nd Northern Provincial Council election was held after a period of over 2 decades. The 1st Northern Province (under a merged North-East) was annulled when its first Chief Minister declared a unilateral declaration of independence in 1990.

Our doubts that the people of the Northern people would have given more than the 82,838 that voted for the ruling party reconfirmed what many had been saying that the Tamil people are ungrateful and will always be ungrateful even if it meant saving their lives, developing the north giving them the freedom that they never enjoyed under the LTTE because they are programmed to always vote for a Tamil (even the low castes would end up voting for a high caste because the Tamils were never ones to challenge or change the status quo). With this realism being brought home what can be said is that the results have only shown the Tamil voters for who they are and has not diminished the efforts by the armed forces who toil day and night to build homes for Tamils who had never been living in a brick home but in huts throughout their stay under LTTE defacto rule and the Government who has been spending on developing the North at the cost of the South in an all-out effort to please foreign nosy parkers breathing fire down the Government’s throat. The Government must realize that doing things to please nations and foreign leaders functioning to an agenda is of little use to the country especially to the taxpayers footing the bills.

The TNA who fielded Wigneswaran as its Chief Ministerial candidate and submitted its controversial manifesto at the last minute needs to also realize that under the 13th amendment to the Constitution which introduced the provincial council system, it is the Governor appointed by the President of Sri Lanka and not the Chief Minister who has executive power in a province on behalf of the President.

The TNA for its part needs to also note that it should not think that the people voted for the contents of its manifesto. How many read a party’s manifesto and decides to vote based on its contents anyway? Therefore, the TNA need not presume that the votes received were the people’s concurrence for its self-determination drive. The Tamil people voted for the TNA simply because the part was Tamil. Only 82,838 Tamil voters had been thinking outside the Tamil-Only mentality.

However, the TNA and its Chief Minister issuing some high-handed statements pre and post-election seem to think that its victory was equated to that of a Presidential election. Unfortunately, both TNA and Wigneswaran need to wake up from day dreaming.

Thus, executive powers of a Province are exercised not by the Chief Minister but by the Governor. It is the Provincial Governor who controls the provincial public service and not the Chief Minister. It is the Governor who shall provide for and determine all matters relating to the terms and conditions of employment of officers of the provincial public service. The Governor is also empowered to alter, vary or rescind any order of the Provincial Public Commission.

It is the Governor who appoints the Chief Minister so who does Wigneswaran think he is to request the President of Sri Lanka to come to Jaffna and hand over the appointment letter and why should for just one Chief Minister, the President degrade the role of his own Governor?

The TNA and Wigneswaran needs to wake up to the fact that the Chief Minister and Board of Ministers are simply there to ‘aid and advice’ the Provincial Governor and what Wigneswaran and the TNA needs to take note of is that the Governor is NOT bound to act on the advice of the Chief Minister. Therefore, these realities need to be accepted before they presume they can function differently to what is legally sanctioned and then create issues for themselves and the entire province. What TNA and Wigneswaran need to realize is that the decision of the Governor shall be final and the ‘validity of anything done by the Governor shall not be called in question in any court’. Moreover, no moneys can be withdrawn from the provincial fund except with the sanction of the Governor and a Provincial Council may not pass any statute imposing, abolishing or altering provincial taxes, or authorizing the receipt of money without the recommendation of the Governor.

Given that the TNA and its Chief Minister had been making a fuss over land and police it is best that both come to terms with the fact that police and public order in a province is effectively retained in the hands of the President and the land too lies with the state and not the province. “All police officers will be appointed by the Inspector General of Police who is directly under the control of the President.” (Sri Lanka Sun: 30th October 1987) ………while “State land in the provinces will be vested in the President and will not be given over to the Provincial Councils. The principle of central rule will not be affected in the distribution of land. Under the Land policy as envisaged in the Amendment, no state land will be vested in a Provincial Council – in other words no giving away of state land to the provinces…” (Sri Lanka Sun: 30th October 1987 – H W. Jayawardena)

We can empathize with the TNA having had to stomach their class / caste pride for a great length of time under the LTTE for fear and patiently wait until they were able to reach this juncture of finally winning an election in what they feel is their domain.
Nevertheless, it is no better a time for the TNA not to have too high a hope that winning a provincial council election and securing its candidate was voted as the chief minister is nothing to be overtly jumping for joy – the reality is that the Chief Minister is nowhere near the executive control that the Governor yields on behalf of the President. It is good that both TNA and Wigneswaran realizes these shortcomings before they start dreaming too much ending up disappointing themselves and then creating conflicts because they thought beyond their boots.

Therefore, without thinking beyond their noses the TNA and its Chief Minister should look at stopping Tamil people from raping their children, Tamil people getting drunk and abusing their wives, Tamil fishermen being robbed of their livelihood by South Indian fishermen and to uplift the lives of the Tamil people while also ensuring the Sinhalese and Muslims who were driven out of their homes by the LTTE are also welcomed just as Tamils who live in the South are treated. We hope too that the ancient historical sites most of which are Buddhist heritage sites and monuments and other artefacts remain preserved and protected and various underhand initiatives are not taken to distort history as was seen happening during LTTE rule helped by supposed Tamil academics too. There is certainly much that the TNA and its Chief Minister can do and a good way to start is to stop creating situations because it is the only way they know to cover their shortcomings. The TNA will find that there is a big difference in bellowing from the opposition ranks and being handed the leadership mantle within the limitations that first require them to pledge allegiance to the unitary state of Sri Lanka and to ensure separatism does not become a hallmark of their election victory –because that was not what they were voted in to do.