CAA makes its biggest raid ever 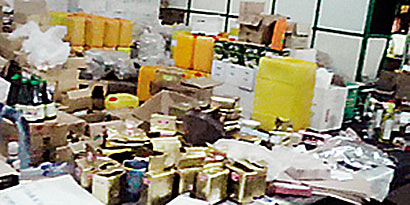 The Consumer Affairs Authority (CAA) made the biggest raid in its history when officers recovered a huge consignment of expired food items which could be worth nearly Rs 100 million from a large storage in Kotahena yesterday.

A spokesman from the CAA said the value of the consignment of goods was well over Rs. 100 million. He said the consignment comprised cheese, margarine, vegetable cooking oil, dry yeast, milk powder, vinegar, baking soda, an expensive kind of olive oil imported from Malaysia and cans of tomato sauce. In addition there were a large number of sacks full of gelatin and cans of gee.

It had been found that the brand name of the products and the expiry dates of the entire stock of goods have been changed in a fraudulent manner.

Accordingly the company had been supplying outdated cooking oil to a supplier of fast food which operates a chain of outlets under an internationally popular brand name. The company had also been selling expired dry yeast to a number of bakeries.

CAA officials sealed the storage late last night. They were apparently making plans to make a proper list of goods which the storage possessed.