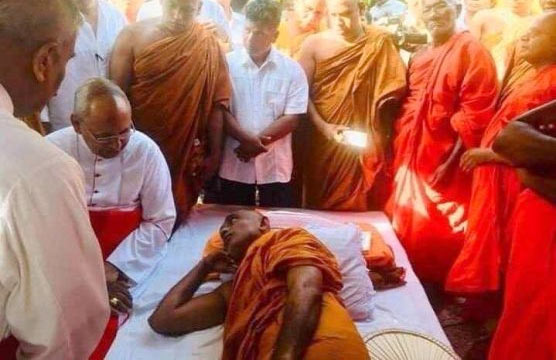 His Eminence Cardinal Malcolm Ranjith visited MP Ven. Athuraliye Rathana thero to inquire of the Thera’s wellbeing, at the site he is engaged in a protest fast.

The Cardinal said he visited the thera to stand up for the rights of those who fell victim to the Easter Sunday attacks.

Speaking to the media at the occasion His Eminence Malcolm Cardinal Ranjith, Archbishop of Colombo noted several primary facts of the incident such as who had funded and directed the attacks had still not been revealed.

The Cardinal added the President and Prime Minister must conduct investigations and reach the right decisions.

His Eminence added that it was unwise to hand over the country to other foreign powers and therefore he believes that Ven. Athuraliye Rathana thero demands are justifiable.