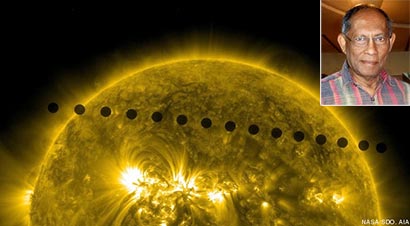 A few days ago (June 5th and 6th), during the much publicised transit of Venus, microorganisms living in the upper layers of the clouds that shroud this planet would have reached Earth.  This is according to the latest research carried out by Professor Chandra Wickramasinghe and Dr. Janaki Wickramasinghe of the Buckingham Center for Astrobiology.

Professor Chandra Wickramasinghe told this corresponent, “The solar wind (a wind of charged energetic particles from the Sun) stretches out the atmosphere of Venus into a long trailing plume that drives bacterial particles away from the planet.  At the time of the June transit the Earth was exactly in the firing line and actually crossed this plume.  We estimate that, at the very least, a thousand trillion bacteria and perhaps more than a trillion trillion viruses could have reached the Earth on this day.”

The possibility of specialised microorganisms inhabiting the yellow-tinged clouds of Venus has been under discussion since the 1980’s when the earliest Venera space missions began to explore the planet.  Now, the serious prospect of a Venusian aerobiology – similar to the aerobiology and microbes that inhabit the Earth’s clouds – seems to be more secure.

Professor Wickramasinghe further said, “”All the evidence points to the clouds of Venus being likely homes for microbial life.  Of this there is now little question.  The question as to whether our neighbouring planet could occasionally infect our planet depends on whether there are routes for transfer from the clouds of Venus to Earth.   Transits of Venus offer the best such routes.”

Prof. Chandra Wickramasinghe and Dr. Janaki Wickramasinghe of the Buckingham Centre for Astrobiology published the case for such viable transfers in 2008 (Astrophys.Sp.Sci, 317, , pp. 133-137; http://adsabs.harvard.edu/abs/2008Ap%26SS.317..133W) and, now, in the Journal of Cosmology in relation to the most recent transit.  The case for such a transfer is based on investigations of the effect of the solar wind on the atmosphere of Venus as well on the actual detections of charged particles from Venus near the Earth.”

Wickramasinghe told this correspondent, “This biological connection between Venus and Earth is of course not new.  Transfers of the bacteria that would have occurred a few days ago must have happened at every transit for countless ages. Earth and the Goddess of love are therefore genetically related – neighbouring planets and biological siblings! ” 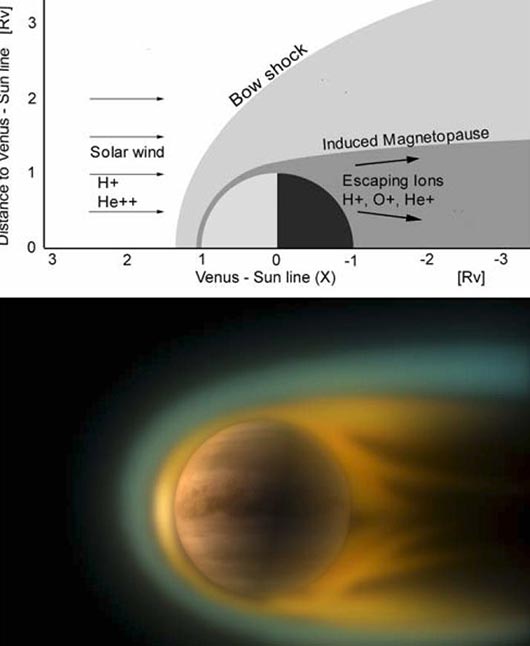