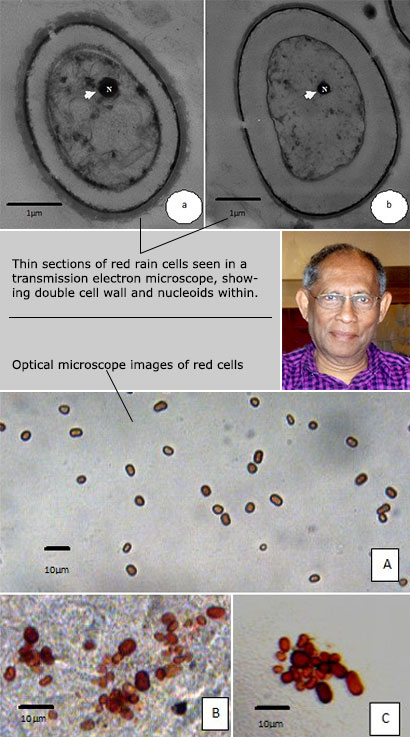 Explaining the recent Polonnaruwa showers of yellow rain Dr. Chandra Wickramasinghe said it is part of the growth cycle of red rain.

In an interview the scientist of the Buckingham Center of Astrobiology in UK said, “The Kerala rain also had the same changes of colour from red to yellow. In the cultivation of the cells we found that the young cells started off as yellow. It is part of a growth cycle.”

Wickramsinghe recently visited Sri Lanka to collect samples of red rain from the scientists of the Medical Research Institute (MRI) at Borella and have extensive discussions with them to find out preliminary discoveries of the red rain.

The Kerala state of India is the first area in South Asia that reportedly experienced red rain leading scientists to investigate the phenomenon.

The Buckingham Center for Astrobiology recently said , “Preliminary examination of the Sri Lankan red rain has shown the presence of red cells almost identical to the Kerala red rain cells.   However, despite several years of study by various groups, the Kerala red rain cells have not yet been convincingly identified, and an extraterrestrial origin of the cells still remains a possibility.”

The Kerala red rain was featured in a cover story of the New Scientist magazine of 4th March 2006.

Dr. Chandra Wickramasinghe is world’s main proponent of the panspermia theory that says life first arrived from outer space on planet earth riding on comets and that still does.

In November and December Sri Lanka in several places has experienced a rare conjunction of red rain, fireballs that resulted in carbonaceous meteors .

The Buckingham Center for Astrobiology commenting on the phenomenon said, “In the case of the Sri Lankan red rain cells, the mystery deepens with chemical analysis that shows them to contain unusually high concentrations of the elements arsenic and silver.”

Initally, the Kerala scientists believed there is no DNA in the in the red cells of the rain. Commenting on that Dr. Chandra Wickramasinghe said, “We have not isolated DNA from the Kerala red rain, probably because it is tightly held inside thick cell walls. Dr. Wainwright says that tests for the presence of DNA are positive and I tend to believe that. The no DNA assertion is made only by Louis in India.” (EOM)