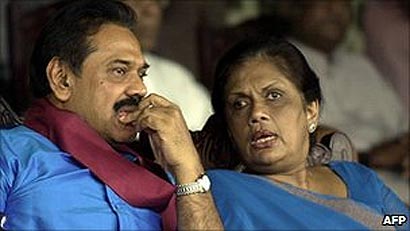 Former Sri Lankan President Chandrika Kumaratunga has condemned the current government, saying it has failed to win peace in the country after the war.

She alleged that members of ethnic minorities are leaving the country in response to its policies.

Giving a lecture in Colombo, she said her children had reacted with anguish to a controversial TV documentary on alleged war-time atrocities.

She has always been critical of her successor, Mahinda Rajapaksa, but these remarks are perhaps her strongest yet.

Mrs Kumaratunga said the government was not committed to sharing power with ethnic minorities and warned that if it continued its “winner-takes-all” policy, large numbers of minority people would continue to leave the country – referring to Tamils, Burghers, as well as people of mixed descent.

She said Sri Lanka was now a “terribly divided nation” and that the state was against everyone who opposed it, whatever their ethnic group.

And she said both her adult children, who lived abroad, had telephoned her, one of them sobbing, when the British station Channel 4 broadcast a documentary purporting to show war crimes by both sides in the war.

After it her son said he was ashamed to call himself Sinhalese and Sri Lankan, she said.

The government says the documentary is a fake.

Mrs Kumaratunga’s blame was not all directed at the current government.

She said that Sri Lankans should have the humility to admit they had “failed as a nation”.

And she strongly criticised an act introduced by her own father as prime minister, which elevated the Sinhala language above others: she said it caused ethnic riots and contributed to the war by excluding minorities.

The former president’s remarks came as local elections appeared to confirm the country’s ethnic divisions, with a Tamil party victorious in the north and the president’s party sweeping the board elsewhere.