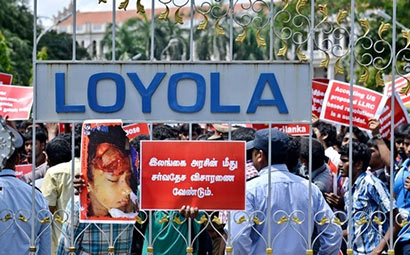 Eight students of a city-based college have embarked on a ‘fast-unto-death’ here on the Sri Lankan Tamils issue.

The students of the Loyola College here, who began the fast yesterday, are staging the protest to press their seven-point charter of demands including an independent probe against Colombo for alleged war crimes, referendum on Tamil Eelam (separate homeland for Tamils) and slapping economic sanctions on Sri Lanka, a protester Joe Britto said.

Meanwhile, DMK president M Karunanidhi appealed to the students to withdraw their fast and resort to other peaceful means of protest.

“Considering that life of every youth is important, the students should immediately withdraw their hunger strike and instead involve themselves in other peaceful means of protest,” he said in a statement.

MDMK chief Vaiko met the students today and expressed his support to them. (Courtesy The New Indian Express)