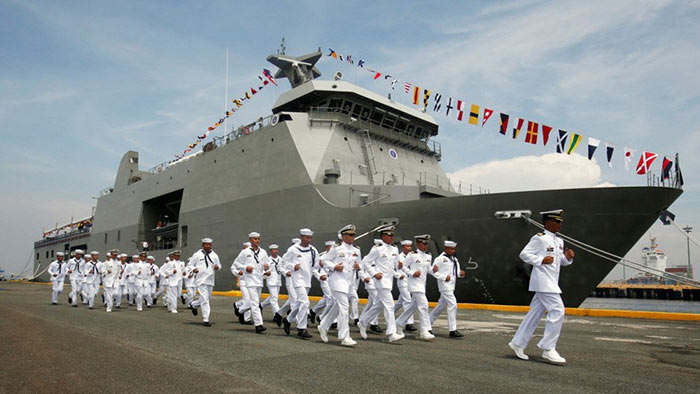 China will donate warships to Sri Lanka and the Philippines in the latest effort to boost its military influence in the Indo-Pacific region.

The gift of a frigate to Sri Lanka was announced last week by Senior Colonel Xu Jianwei, military attaché at the Chinese embassy in Colombo, while Philippine naval spokesman Commander Jonathan Zata confirmed the donation of four new patrol boats from Beijing on Sunday.

Despite the unresolved South China Sea dispute with Manila, China has offered military aid worth US$14 million in small arms and fast boats to the Philippines, and donated thousands of rifles and ammunition to the Philippine police and military for counter terrorist purposes.

China’s efforts to expand its military presence in the region have caused concern in India, which fears that it may use Sri Lanka’s Hambantota Port for military purposes even though the concession contract that handed control to a Chinese firm last year prohibits this.

“China has had close military connections with Sri Lanka since the campaign against the Tamil Tigers in the 2000s,” said Wang Dehua, a South Asian expert at the Shanghai Municipal Centre for International Studies.

“India also has donated many armaments to South Asian countries, including warships to Sri Lanka. Why cannot China do the same? Sri Lanka is in need and China is able and willing to provide assistance,” Wang said.

No details have been released about the frigate given to Sri Lanka, but Chinese military analysts believe it is likely to be a type C28A or C13B corvette, or even a newly retired type 053 frigate.

The three classes are the most common Chinese warships exported to other countries, with buyers including Algeria, Bangladesh and Pakistan.

Third world countries that have bought Chinese warships regard them as affordable and cost-efficient, according to Zhou Chenming, a Beijing-based military commentator.

“It is possible China will give [Sri Lanka] one or two more,” said Zhou. “This one single ship would not make much difference to the current regional military balance in South Asia, and it will be mainly used for anti-piracy purposes.”

Zhou also argued that China had been supporting its ship building industry in the wake of the global downturn, with the navy expanding and upgrading its fleet.

“It has been common practice for the government and military to place orders to sustain those industries in the recession,” said Zhou.

Zhou added these ships were relatively cheap to build and the ships given to other countries could became profitable for China in the long term through refitting and maintenance.