China to Invest in Sri Lanka’s Transport Sector, Including a New Northern Expressway 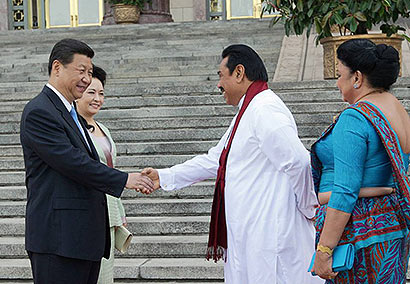 China has pledged to provide further funding to develop Sri Lanka’s transport sector that includes a number of expressways, road networks and railway lines, including a new Colombo-Jaffna expressway. The agreement was one of several others reached during bilateral meetings between Sri Lanka and China that took place in Beijing this afternoon.

As a part of the proposed Colombo-Jaffna highway, the Chinese government will also aid Sri Lanka in developing a Colombo-Kandy-Kurunegala expressway and extending the southern expressway from Matara to Kataragama.

President Rajapaksa thanked Chinese President Xi Jinping for China’s continued support to Sri Lanka in a number of spheres. He also congratulated President Jinping, who took over as China’s new president in March of this year, and said his assumption to this high office is testament to the confidence that the Chinese people have in him.

President Rajapaksa said that his many visits to the East Asian nation have helped him gain a deep and profound understanding of China’s political, economic and social dynamics, and that he looks forward to working closely with the new administration.

President Jinping, recalling the long-standing ties between China and Sri Lanka, said that the fact that President Rajapaksa is visiting China for the seventh time is an indication of the strength of the relation between the two countries and said he looks forward to further strengthening bilateral ties during his tenure.

During the bilateral meeting, the two delegations also discussed trade and tourism. The two countries signed an agreement to establish two committees that would work towards a free trade agreement. This would give Sri Lankan products such as apparel, gems and jewelry, tea and rubber wider access in the Chinese market.

In the area of tourism, Sri Lanka and China agreed to work towards the goal of attracting 100,000 Chinese tourist arrivals to Sri Lanka by 2015. China has also pledged support for a number of other projects: Water supply schemes in Attanagalla, Minuwangoda and Kurunegala, an international conference hall in Kandy, an arts theater in Anuradhapura and the development of the national hospitals in Colombo and Ragama.

2 Responses to China to Invest in Sri Lanka’s Transport Sector, Including a New Northern Expressway