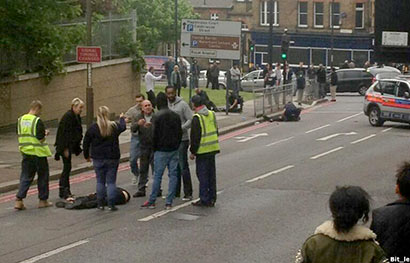 The labels “Buddhist majority attacks minority”, “extremists Buddhists target innocent Muslims”, “Buddhist chauvinists”, “fanatical Buddhists attack Muslims” were recently spread across virtually all mainstream media attempting to embarrass and humiliate the Buddhists of Sri Lanka. Why are these same media and human rights organizations mum now on the attacks on Muslims in Britain following an isolated incident of a British army personnel stabbed to death?

The attacks against Muslim across the UK took place within hours after the murder of Drummer Rigby last Wednesday and has jumped to over 200 hundred in just a week.

A group known as the English Defense League have even clashed with the police, shouting anti-Muslim slogans, 10 mosques have been attacked and so far over 200 incidents against Muslims have been reported within the past week alone. In Grimsby a mosque was petrol bombed by supposedly two former soldiers and a mosque in Canterbury has been attacked too. At Braintree mosque an individual tried to enter the mosque saying ‘Where is your Allah now,’ with knives and a smoke bomb. An improvised petrol bomb was thrown at a mosque in Milton Keynes during Friday prayers. The British National Party leader, Nick Griffin, who visited Woolwich, provoked widespread disgust for tweeting that the alleged killers should be wrapped in “pig skin” and shot again. The “True British Patriots” Facebook page carried calls for mosques to be burned down. The official website of the National Front party berates “Muslim scum”.We shall refrain from commenting on what the social media websites are featuring against the Muslims but will say that we did not expect the Brits to be so aggressive.

Tell Mama (Measuring Anti-Muslim Attacks), a London based group that monitors anti-Muslim hatred, spent the evening logging any incidents of Islamaphobia that occurred in reaction to events in Woolwich. It documented 38 reports of anti-Muslim incidents – most of them online and eight at a street level.

By comparison, in its first year of operation (to March 2013) Tell Mama recorded 632 incidents in total, averaging at about 12 a week.

The leader of the English Defense League Tommy Robinson said “they’re chopping our soldiers” heads off. This is Islam. That’s what we’ve seen today. They’ve cut off one of our army’s heads off on the streets of London”. …”our next generation are being taught through schools that Islam is a religion of peace. Its not. It never has been. What you saw today is Islam. Everyone’s had enough. There has to be a reaction, for the government to listen, for the police to listen, to understand how angry this British public are”. Does this mean that the world should watch Muslims being attacked and media does not give the same balanced coverage? Does this mean it is only the British who can react – that only the British who can get angry?

In contrast when Buddhists placed very clearly that proliferation of mosques, distortion of history, encroachment of temple lands, loud speaker usage in mosques flouting Supreme Court interim order, halal certification, conversions, influence of petro dollars, Arabic dress code had nothing to do with Islam professed by Prophet Mohamed being spearheaded by extremists groups camouflaging as Islamic the entire world came down on Sri Lanka and people arrested became heroes. No one was willing to listen when Sri Lanka said that it was not against Islam but against non-Islamic Arabic culture attempting to dilute and influence the indigenous cultures of Sinhalese and Tamils that was being protested. BBC’s own reporter described Sri Lanka’s situation as “Hardline Buddhists targeting Sri Lanka’s Muslims”. It would be very interesting to know what this same reporter has to say about the over 200 attacks on Muslims in the UK following just one murder – how “hardline” how “extremist” how “chauvinistic” will he call the Brits?

What the West in particular the British need to understand is that contrary to what we are all made to believe for which the media is largely to blame is because they have conveniently gone with the tide of allowing Muslims to be projected as the perpetrators whilst it is a bandwagon of West-combined Wahhabi-Deobandi-Salafi plot that is causing disarray throughout the world. It is these people who are being radicalized and imported to different countries all over the world and it is these people who are being armed and ordered to create conflicts by Western governments… they have succeeded in Iraq, Afghanistan, Libya, Egypt, they are now in Myanmar, Indonesia, India, Pakistan but they are failing in Syria.

The Muslims of the world are not to be blamed for the actions of these extremist groups. Media has wronged the Muslims by giving a false notion that they are both victim and perpetrator simply to provide the sensationalism to sell their paper and draw people to their news. That injustice needs to be corrected.

When Deputy Prime Minister Nick Clegg expressed fears that the Woolwich atrocity could lead to long-lasting damage to community relations. “Fear is an extraordinarily powerful emotion and when it takes root,” he said, “it has a very, very corrosive effect on every part of our lives. We have a choice to either allow that powerful corrosive feeling of fear to seep into every second and minute and hour of our lives or we can make a choice that we’re not going to change our behaviour.” – we totally agree, but then it is the British establishment that needs to undo some of its serial wrongs taking place for centuries. Most of these wrongs the ordinary British are totally unaware of and probably many others too but thankfully the communication networks and the internet provides the pedestal to find the truth – searching and finding the truth is left to the individual. Just like one man’s terrorist is another man’s freedom fighter, truth can be conveniently twisted. All people need to ask is who originated “extremism” and unleashed it upon the world.