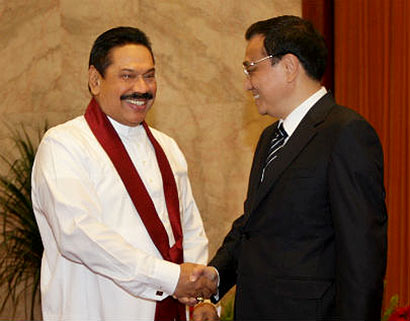 Chinese Prime Minister Li Keqiang met President Mahinda Rajapaksa this afternoon at the Great Hall of the People and assured him that the trade imbalance, which is now in favor of China, will soon be addressed to benefit Sri Lanka as well.

“China will explore the possibility of establishing an industrial zone in Hambantota,” Prime Minister Keqiang said. “In addition, we will support Sri Lanka to develop capabilities in satellite communication, space technology and maritime industries,” the Chinese premier added.

Prime Minister Keqiang further reiterated China’s commitment to following through on all the development projects that were agreed upon during the bilateral agreements yesterday. They include Colombo-Jaffna and Colombo-Kandy-Kurunegala expressways, the extension of the southern expressway, working towards a free trade agreement, water supply schemes in Attanagalla, Minuwangoda and Kurunegala, an international conference hall in Kandy and an arts theater in Anuradhapura, among several other projects.

President Rajapaksa, who is currently on a four-day state visit to China, thanked the Chinese government for its continuous and multifaceted support to Sri Lanka’s development and noted that the East Asian nation has become a key development partner in Sri Lanka’s post-conflict era.
The Chinese Prime Minister said, “The long-standing friendship between the two countries has now reached the level of strategic cooperation” and described President Rajapaksa as “a mature politician and able leader who ushered in peace to the country.”

President Rajapaksa told the Premier that the terrorist war that went on for nearly 30 years devastated infrastructure particularly in the north and east. Now that peace has returned to the country, the President said, the government’s focus is to develop all areas of the country on an equal basis. President Rajapaksa also expressed gratitude to the Chinese government for its consistent support in combating terrorism and its support at regional and international fora. He further reassured the Premier that Sri Lanka is committed to maintaining the “One China Policy” in its foreign policy.

Before concluding the bilateral talks, President Rajapaksa reminded the Premier of the Commonwealth Heads of Government Meeting (CHOGM) that will take place in Sri Lanka in November of this year and invited China to send a business delegation to the Commonwealth Business Forum, which is open to non-Commonwealth nations. Prime Minister Keqiang said his country will make use of the opportunity.

In conclusion, the President also extended invitations to both the Chinese President and Prime Minister to visit Sri Lanka.