COCONUT PLANTERS ANGUISHED OVER THE MANNER TREES ARE CUT DOWN! 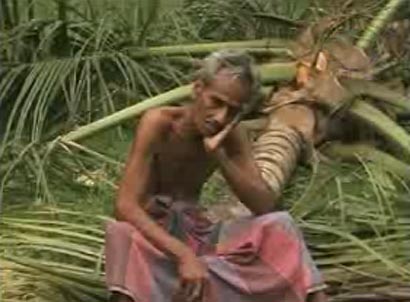 An incident has been reported from Matara where coconut trees have been felled for no reason at all, at a time when the price of coconuts is escalating.

The Coconut Research Institute in Lunuwila took a decision to cut down several coconut trees in the Matara district due to a disease which was spreading in the area.

Accordingly, several coconut trees were cut down but some cultivators say that officials have earmarked some trees for felling despite those trees not being affected by the disease.

“This tree would have produced nuts for another 10 years. I think these markings are unfair. They have marked unaffected trees as well,” said one planter.

“When they were marking the trees, we said these trees were not affected. They said that they should be marked as they would also be affected,” said the planter.

According to cultivators, there is a risk of coconut harvest decreasing rapidly due to the felling of unaffected trees.

“We accept that some trees are affected by the disease. The manner in which the trees are marked by the state would however turn these lands into marches. We also consent to the removal of the affected trees. We are even prepared to remove the trees which may be affected in the future,” said another planter.

“This causes grief. Who should we turn to?” lamented the planter.

Coconut cultivators have called for a proper inspection so that justice would be done to them.

When inquired, the Secretary to the Ministry of Coconut Development, Anura Siriwardena said that the affected trees were marked by a group of trained officers attached to the Coconut Research Institute.

He went on to say that thereafter, the Matara District Secretary had been instructed to cut down the trees and remove them.

Home » COCONUT PLANTERS ANGUISHED OVER THE MANNER TREES ARE CUT DOWN!