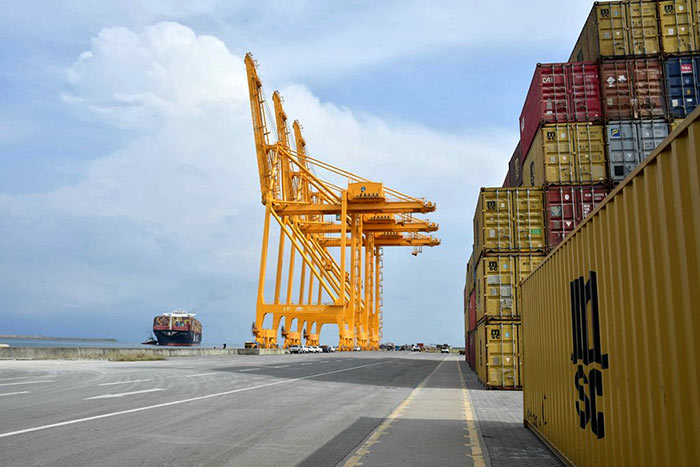 The construction of the second phase of the Eastern Terminal of the Colombo Port will commence today under the patronage of President Gotabaya Rajapaksa and Prime Minister Mahinda Rajapaksa.

With the planned construction beginning today, the length of the Eastern Terminal will increase to 1,320 meters letting the Sri Lanka Ports Authority (SLPA) to handle the biggest ever container transporting vessels, Ports Minister Rohitha Abeygunawardena said.

The Minister was addressing media along with SLPA Chairman and other representatives of the SLPA at the Government Information Department in Colombo yesterday.

The construction of the Eastern Terminal, which expands on a 75 hectare land extent, has been scheduled to complete on July 4, 2024. Once completed, the terminal will consist of 12 giant cranes and 40 normal cranes.

Minister Abeygunawardena said that the construction will be carried out with using local funds and it may around US$ 1 billion costs to construct a complete terminal.

He further added that the Colombo harbour is ranked at 23rd place of the world’s port ranking. Once started functioning of the Eastern terminal the Colombo harbour will obtain the 13th place of the world’s port ranking becoming a key port of the world. In line with the port sector developments, the construction of the Western terminal will commence by 2027. With the construction of Northern breakwater, the SLPA will get an advantage of having three more terminals, which allow SLPA to be among top 5 ports in the world. Accordingly, the SLPA will obtain the capacity of handling 35 million BTU annually by 2035.