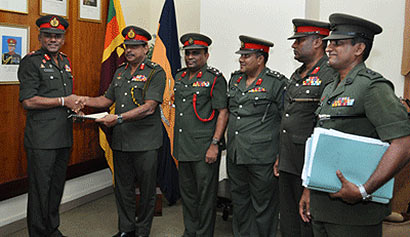 The Report of the findings into the recent Rathupaswala – Weliweriya incidents, complied by a Court of Inquiry (C of I), presided by Major General N.A.J.C. Dias, Adjutant General  of the Army was handed over to the Commander of the Army Lieutenant General Daya Ratnayake, Wednesday (21) late evening at Army Headquarters.

Members of the C of I that was appointed by the Commander of the Army on 2 August 2013, include Major General N.A.J.C Dias (President), Brigadier K.J. Jayaweera, Brigadier N.I. de Silva, Colonel T.D. Weerakoon and Lieutenant Colonel W.P.A.D.W. Nanayakkara (Secretary) who prepared this comprehensive report covering all aspects of the incidents that lead to the violent incidents in Rathupaswala – Weliweriya.