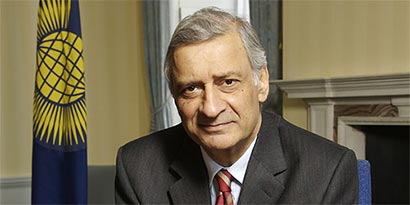 Commonwealth is enriched by Sri Lanka’s membership and the country also gains from access to the Commonwealth’s networks of 54 member governments through the sharing of resources and experiences and opportunities, said Commonwealth Secretary General Kamalesh Sharma. Sharma issuing a statement over his visit to Sri Lanka to participate in the 58th CPA conference in Colombo said Sri Lanka is one of the eight founding members of the modern Commonwealth, and has a unique history and heritage which forms part of the rich diversity of the Commonwealth.

He said that the Commonwealth, as an association of peoples and governments, is enriched by Sri Lanka’s membership. “Sri Lanka contributes generously and also gains from access to the Commonwealth’s networks of 54 member governments as well as professional associations and civil society through the sharing of resources, experiences and opportunities.

“I was touched and honoured to be received so warmly during my visit, from 9 to 13 September, and I depart with appreciation and also a deep and first-hand understanding of Sri Lanka’s current national challenges and priorities”, he said.

During my visit, I met with the President Mahindra Rajapaksa, External Affairs Minister Prof G.L. Peiris Monitoring MP for Ministry of External Affairs Sajin de Vass Gunawardena, Secretary to the President, Lalith Weeratunga, and other senior officials. I also met the Leader of the Opposition, Ranil Wickremesinghe, and the community of resident High Commissioners representing other Commonwealth member states.

Sharma said that he visited Thrikkovil in the Eastern province and he was briefed on an entrepreneurship project for young people located in former conflict areas involving the support of commercial banks and the industry bodies.

Excerpts from the statement “My itinerary also included a visit to Thirukkovil in the Eastern Province, where I appreciated the opportunity to meet with local officials; to be briefed on an entrepreneurship project for young people located in former conflict areas involving the support of commercial banks and the industry bodies, where the Commonwealth is set to become a partner in the extension of the project concept; and to visit the Kanchiramkuda Resettlement Project.

All of my meetings were informative and valuable, and afforded the opportunity to gain an up-to-date perspective of how the Commonwealth’s work is viewed and how we may be of greater assistance and relevance to all Sri Lankans.

We are at present giving effect to a series of reforms to sharpen the impact, raise the profile and strengthen the networks of the Commonwealth. In particular, we are committed to working in closer partnership with the family of accredited Commonwealth organisations, including the Commonwealth Parliamentary Association.

My visit provided an opportunity to be briefed on the Sri Lankan Government’s preparations for its hosting of the CHOGM next year. I visited some of the proposed venues. The logistical arrangements are well in hand, as is the state of readiness of the various venues that will be used.

The Sri Lankan Government wishes to have a development orientation to the discussions and outcomes of the 2013 CHOGM, with a focus on drawing non-urban communities more meaningfully as participants into national life and as beneficiaries of national growth and development.

This thematic orientation is likely to have strong appeal to Heads of Government from across the Commonwealth, especially in developing and small states, where the challenges of providing national services and economic opportunities to remote communities is felt strongly.

“We look forward to discussing this further with the Sri Lankan Government in order to support the preparation of practical outcomes from the 2013 CHOGM”, he said.

The goal of the Commonwealth’s partnership is to assist Sri Lanka’s own efforts in providing access for every individual citizen to a life of dignity and socio-economic opportunity. The Commonwealth is also committed to assisting Sri Lanka in continuing to strengthen its culture of democracy and pluralism, and to advance the Affirmation of Commonwealth Values and Principles.

Each Commonwealth member country has its own unique development context and challenges.

The Commonwealth Secretariat is committed to pursuing practical actions in Sri Lanka, in close consultation with the government, especially assistance that places young people at the heart of national development as this country’s future leaders as well as agents of social and economic transformation.

As a result of my consultations and other recent contacts between the Commonwealth Secretariat and the relevant Sri Lankan authorities, the Commonwealth is pleased to deepen its partnership with Sri Lanka in the years ahead.

We will pursue possibilities for new or enhanced assistance in the following areas:

• Public service strengthening including support for training of public servants; strengthening leadership capacity of senior officials; promotion of collaboration between the public and private sectors; and, further support for the Sri Lanka Institute for Development Administration;

• Youth entrepreneurship, including the implementation of the ‘Harnessing Aptitude and Potential Entrepreneurial Skills in Youth’

(HAPPEY) project in partnership with the Federation of Chambers of Commerce and Industry of Sri Lanka and the Ministry of Youth Affairs and Skills Development. This project includes exploring opportunities for commercial banks to support young business creators and job creators;

• Establishing a pilot project on Sports for Development and Peace in the North and East of Sri Lanka, as requested by the Department of Sports Development and in partnership with that department;

• Exploring further the establishment of a cadre of trainers to implement a ‘Youth Ambassadors for Peace’ project as part of the recent peace-building work developed jointly by the Commonwealth Youth Programme’s Regional Centre for Asia and India’s Rajiv Gandhi National Institute of Youth Development;

• Supporting the strengthening of the Office of the Elections Commissioner, according to its needs and priorities;

• Supporting the strengthening of the National Elections Commission, as recommended by Commonwealth election observers;

• Supporting implementation of the Lessons Learned and Reconciliation Commission report in ongoing consultation on specific areas to be agreed with the Government of Sri Lanka; and,

• Professionalisation of the media, including training for journalists in reporting on development and growth issues, and reporting during elections.