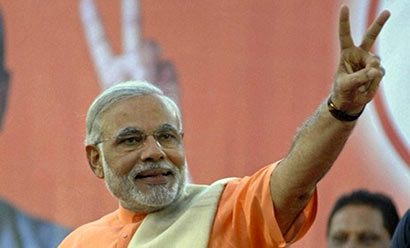 India, that is Bharat, has elected its 16th Prime Minister in a historic election. He is none other than Shri Narendra Modi securing a virtual landslide victory in a mammoth election drawing 800million eligible voters. There has not been a clearer vote on Bharat’s choice of leader. It is a victory that individually Shri Narendra Modi can be proud of because it means he does not need to go behind unruly coalition partners to blackmail him at every turn. Indians can be proud that they have given the numbers for Shri Modi and the BJP to lead Bharat ‘with less government and more governance’. Buddhist Sri Lanka is very proud that Shri Modi is Prime Minister of Bharat from Varanasi where a 20foot giant electronic lotus is to be floated on the Ganga in celebration.

There was not a name Modi was not called. From being called a modern-day Hitler to mocking him by creating lies, a global campaign steered by foreign forces took out every dirty trick in the book to send salvos against Modi. Very few in the Indian media rose to defend Modi against tirade of lies that were spun. None of these pranks worked against a rise in Hindutva sentiment that clearly depicted a renaissance awaiting Bharat so long as Modi and BJP remains committed to ensuring the balkanization attempts upon India using the secular-multicultural theme is not adhered to. It shows at best that a foreign sponsored Indian media working to foreign agendas cannot win elections through lies.

The victory is Modi’s victory for it was the charismatic leadership that drew entire Bharat to rally round Narendra Modi including Muslims clearly indicating foreign sponsored Islamic fundamentalist movements and groups were not welcome by them. Modi’s rule in Gujarat is a good benchmark on how his leadership with ethnic communities has proven far better than Congress lip-talk.

Though final results are yet to be announced the BJP has well over the required numbers to declare itself winner with the voting trend of all states unanimous in their decision. Though AIDMK headed by Jayalalitha has won in Tamil Nadu, it is a relief for us in Sri Lanka that she will not be required as a coalition partner and BJP would be saved from tantrum politics that Congress fell victim to.

As for Narendra Modi, the message from Sri Lanka is not to repeat the same mistakes that post-independence Governments committed against Sri Lanka starting off with the Indira Gandhi initiative to arm, train and finance Tamil youth into armed militants clandestinely in India which eventually resulted in those same armed militants taking the life of Rajiv Gandhi on Indian soil.

There are some promoting the Eelam quest which has now been hijacked by the West to creating a Christian foothold in Asia joining Tamil Nadu and Sri Lanka’s North while attempting to portray a divide between Hindus and Buddhists, which is far from so. A deeper look will show that centuries of Hindu-Buddhist ties were broken because of colonial divide and rule policies and the role of the Church. The calls for the implementation of the 13th amendment is the first step towards that bigger goal in a global plan to break up sovereign nations to create regional councils that would be under western rule.

The patriotic forces in Sri Lanka are happy for Bharat mostly because the victory stalled India being hijacked to approve and appease to every Western imperial agenda being carved.

Bharat cannot dislocate itself from its Asian roots. Bharat cannot repeat its oft repeated mistake of bullying its neighbors. Bharat’s political, economic and military might must not be targeted against its neighbors. Bharat must continue to maintain its ancient cultural heritage no matter what development takes shape. Bharat’s foreign policy must look East and forget ties because it is Asia’s century. Bharat must never consent to be a spy and servant of Western imperialism.

For us in Sri Lanka, the Buddhists in particular wherein we look up to Bharat as the nation that gave us Gautama Buddha we can only ask that Bharat rise to the occasion through Shri Narendra Modi and do what is right.

India (Bharat) is the cradle of the human race, the birthplace of human speech, the mother of history, the grandmother of legend and the great grand mother of tradition.