Council set up to strengthen the national economy meets 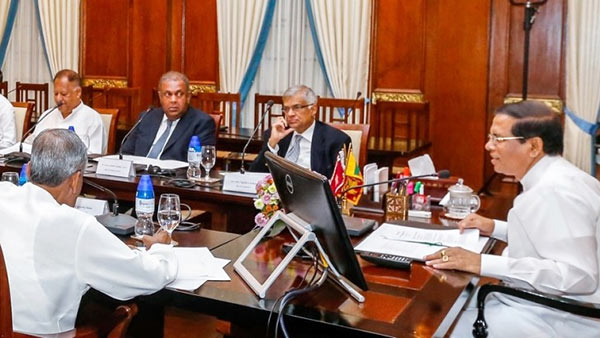 The President pointed out that the main responsibility of this National Economic Council is to take decisions on the national economy of the country by giving priority to local agriculture and industrial sectors. He said discussions will be held with the representatives of the public sector, private sector and entrepreneurs when and as required.

He said the objective of this National Economic Council is to expedite the work for strengthening the rural economy, especially ending poverty.

Attention was paid on the development of infrastructure facilities at divisional level. The President pointed out that returning of the funds allocated for each ministry for related development activities, to the treasury is an injustice done to the public welfare.

The President pointed out the need to implement the decisions taken at the district development meetings. He said the financial allocations should be properly used for relevant development activities.

He drew the attention of the officials about the influence of the improper issuance of loans by financial institutions to the rural people.

The National Economic Council will work on the strategic policies for development, agreements and projects. It also will provide instructions and guidance on this regard.

The National Economic Council will meet once in every two weeks with President’s participation.

The Cabinet approval has been received to appoint Prof. Lalith Samarakoon as the General Secretary of the National Economic Council.

He is a financial economist who works is an advisor to the Asian Development Bank on Capital Markets and is the President of the Sri Lanka Finance Association. Prof Samarakoon has over 20 years experience in the field of economics and has published several publications on developing markets and international financial markets.

Home » Council set up to strengthen the national economy meets