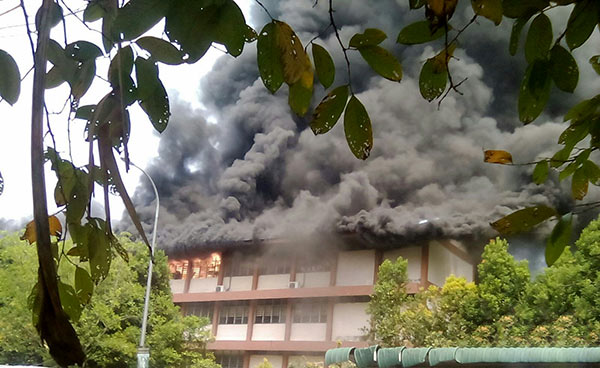 Twenty-five students and two wardens died when a blaze tore through a Malaysian religious school in what officials described as one of the country’s worst fire disasters for years.

The blaze broke out before dawn on Thursday in the two-storey building of the Darul Quran Ittifaqiyah school, located in the centre of the capital, Kuala Lumpur.

Firefighters had the blaze out within an hour but the damage was extensive. Pictures in local media showed beds blackened by fire and covered in ash.

Khirudin Drahman, the director of Kuala Lumpur’s fire and rescue department, said: “It really does not make sense for so many to die in the fire. I think it is one of the country’s worst fire disasters in the past 20 years.”

He said 23 students and two adult wardens were killed – either trapped by the fire or dying from smoke inhalation.

“We are now investigating the cause of the fire,” he said.

Loga Bala Mohan, the deputy minister for federal territories, said: “We sympathise with the families. It is one of the worst fires involving so many lives in the capital in recent years.

“We urgently want the authorities to quickly probe the cause of the deadly fire so that we will be able to prevent future disasters.”

A fire department official at the scene said the blaze had broken out in bedrooms before dawn, and firefighters from a nearby station had been on the scene within minutes.

The Star newspaper reported that the fire and rescue department had raised concerns about fire safety measures at unregistered and private religious schools – known as tahfiz – and had recorded 211 fires at the institutions since 2015.

In August 16 people, including eight students, had fled an early-morning fire at a family-run tahfiz in Baling, in the northern state of Kedah, the paper reported.

There were 519 tahfiz schools registered across the country as of April, but many more were believed to be unregistered, the paper said.

In October last year six people died in a fire that swept through the intensive care unit of a major hospital in the southern state of Johor.