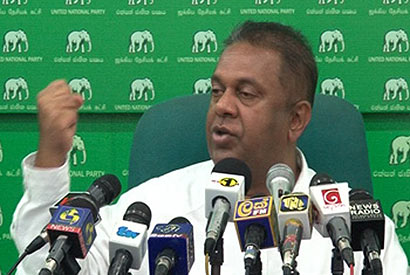 The Matara Magistrate Court ordered police to arrest UNP MP Mangala Samaraweera and ten others in connection with the recent incident in Matara.

The protest against UNP Leader Ranil Wickramasinghe, led by Provincial Councilors Maithri Gunaratne and Shiral Lakthilaka – who were both sacked from the party, commenced from Devinuwara on October 5 while another demonstration led by MP Mangala Samaraweera in support of the UNP leader began from Wellamadama.

A clash occurred between the two groups as both demonstrations neared the Matara Town. Shots were fired during the clash resulting in a tense situation in the area.

Several persons including UNP Southern Provincial Council member Krishantha Pushpakumara were admitted to the hospital with injuries following the clash.

The Provincial Councilor was shot in the leg and had been admitted to the ICU of the Karapitiya Hospital.

Herman Gunaratne, the father of Southern Provincial Council member Maithri Gunaratne, was arrested over the alleged shooting incident as well.