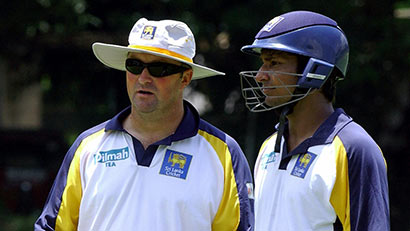 Sri Lanka head coach Paul Farbrace has resigned and is set to take up the position of assistant coach of England, Sri Lanka Cricket said on Tuesday.

Farbrace made it known to Sri Lanka Cricket that he no longer wanted to continue with his present position after being offered the chance to become assistant to England’s newly-appointed coach Peter Moores.

He had served only four months of his two-year contract with Sri Lanka Cricket during which time he led them to the World Twenty20 title in Bangladesh.

“We had talks with Paul and tried to convince him to stay because of the valuable contribution he has made to Sri Lanka cricket during his short tenure,” Sri Lanka Cricket secretary Nishantha Ranatunga said.

“Paul wanted time till today to reach a final decision and he has tended his resignation.”

Farbrace’s name was linked to Moores when the England and Wales Cricket Board (ECB) began interviewing a list of candidates to succeed Andy Flower.

He had returned to England for the Easter weekend after Sri Lanka’s success in the World T20 and although not among the candidates was subsequently interviewed by ECB.

“The (executive committee) will have to sit down and discuss how best we can find a suitable replacement for Farbrace for the tour to England which starts on the first week of May,” said Ranatunga.