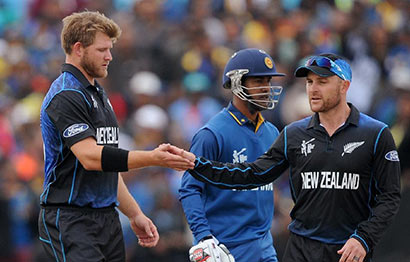 Australia and New Zealand easily won the opening matches at the Cricket World Cup on Saturday in an ideal start for the tournament co-hosts. Still to come: 47 more games and six weeks of competition before the title is decided.

In cold, blustery conditions at Christchurch on New Zealand’s South Island, the Black Caps beat 1996 champion Sri Lanka by 98 runs. Sri Lanka won the toss and sent New Zealand in to bat, but soon regretted that decision when Brendon McCullum made 65 runs and Corey Anderson hit 75 from 46 balls to lift New Zealand to 331-6. Sri Lanka was all out for 233 in 46.1 overs in reply.

“We know it’s early stages of the tournament … and we’ve still got a long road to go down before we can start thinking of making the quarterfinals,” Anderson said.

He was correct — the quarterfinals begin on March 18.

Australia opened its campaign for a fifth World Cup title with a 111-run win over old rival England, with allrounder Mitch Marsh claiming five wickets to dent the English run chase after Aaron Finch scored 135 runs to set the home team on course for a total of 342-9 in front of 84,000 spectators at the Melbourne Cricket Ground.

“Everyone contributed,” said Finch, who was voted player of the match. “It’s a great feeling to get this first one out of the way and hopefully take a lot of momentum for the rest of the tournament.”

England was all out for 231, with James Taylor finishing unbeaten on 98 in a bizarre finish. He was initially adjudged out lbw but had the decision overturned on review by the TV umpire, only for batting partner James Anderson to be given out — run out at the other end — also on review.

One of Sunday’s two matches feature old rivals India and Pakistan, uneasy neighbors politically who also have a long history on the cricket field. Pakistan leads overall in their limited-overs international meetings, but defending champion India has a 100-percent record so far in their five World Cup matches.

The match at Adelaide, capital of South Australia state, prompted some detente back home — India is sending its top foreign ministry official to Pakistan to resume talks after a six-month hiatus.

Taking advantage of the World Cup, Indian Prime Minister Narendra Modi tweeted Friday he spoke to his Pakistani counterpart Nawaz Sharif on the phone and offered to further strengthen ties. Relations between the two countries have been strained since the partition of British India in 1947 and numerous military conflicts over the ensuing decades.

Pakistan captain Misbah-ul-Haq said the secret to success will be to ignore all the fuss — on and off the field.

“I think it is the way to go that you just don’t take anything into the ground when you are playing against India,” he said. “You don’t have to worry about what’s happening outside, what’s going on in the countries. I think you need to focus (entirely) on your game.”

In the other match Sunday, South Africa opens against Zimbabwe at Hamilton, New Zealand.

The tournament is being played in 14 cities across Australia and New Zealand. There will be 42 matches played in the group stage by the two seven-team pools, followed by quarterfinals and semifinals before the March 29 title game.

Meanwhile, players at this year’s World Cup have been given a video warning about match-fixing, and the featured athlete in the production is banned New Zealand cricketer Lou Vincent.

“My name is Lou Vincent and I am a cheat” is part of Vincent’s warning to players and team officials.

Vincent, who appeared for about 30 seconds in footage, was banned for life last year by the England and Wales Cricket Board. 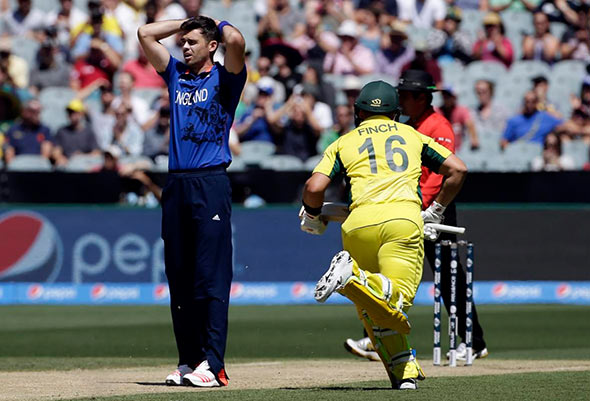