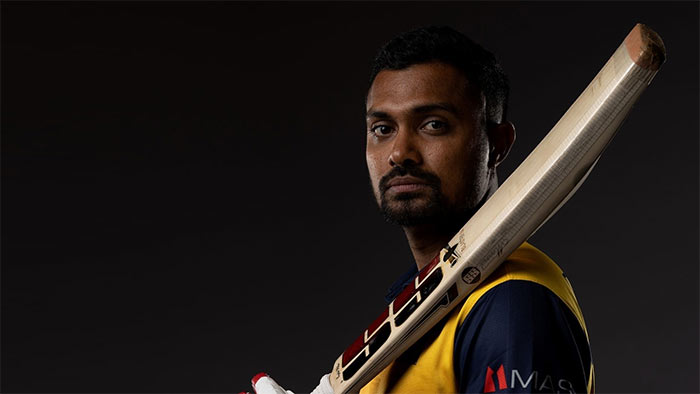 Sri Lankan international cricketer Danushka Gunathilaka has been granted bail on sexual assault charges after a court heard he had the support of the Sri Lankan cricket association and government, and sureties totalling $200,000 were accepted.

The 31-year-old was arrested on November 6 at his team’s hotel in Sydney’s CBD before they flew home following their Twenty20 World Cup loss to England.

He has been charged with four counts of sexual intercourse without consent after allegedly sexually assaulting a 29-year-old woman in the eastern suburbs on November 2, days after they matched on Tinder. No pleas have been entered.

Gunathilaka was refused bail on November 7 and had a NSW Supreme Court bail hearing scheduled for next month. He reapplied for release in the Local Court on Thursday after 11 nights in custody.

The cricketer appeared via video link from Parklea Correctional Centre in a prison-issued dark green tracksuit and wearing socks and thongs.

Police argued there were two unacceptable risks: that the accused would fail to appear and that he would endanger the safety of the complainant.

McKinnon said the woman had been “inundated” and “harassed by unknown people with Sri Lankan names through her social media” and had to shut it down.

She argued Gunathilaka would remember the complainant’s address.

“This case will predominantly be based on consent,” McKinnon said.

The prosecutor submitted those offering support for Gunathilaka “were not known to him prior to his arrest”, and described the person behind a $150,000 surety as a “friend of a friend” from Melbourne who had been an Australian resident since 1999.

“We say … that is another concern for the court as to the influence that this man has in his home country of Sri Lanka,” she said. “He’s got people that he has no personal connections with in this country offering up [a] substantial amount of money to secure his release.”

Defence barrister Murugan Thangaraj, SC, submitted that his client was “being supported by the Sri Lankan cricket association and [the] Sri Lankan government”.

“If he breaches his bail, of course his career would be over,” he said.

The court heard Gunathilaka, who has no criminal record, would be unlikely to face trial until 2024.

McKinnon had argued that on the “back of a strong prosecution case, it is likely he is going to be convicted” and sentenced to full-time custody.

Thangaraj said Gunathilaka’s supporters were friends of his agent and “friends of people in important positions in Sri Lanka”. He said that if his client was an Australian citizen,“of course he would be on bail in these circumstances”.

“We wouldn’t tolerate an Australian person being locked up overseas simply because they didn’t know anyone,” Thangaraj said.

Gunathilaka has surrendered his passport.

His barrister argued that any claimed risk of his client fleeing Australia was “theoretical”.

“This is a man who has now been in [the] media across this country for a couple of weeks. What is the suggestion, he’s going to walk down to Circular Quay and get on a cruise liner or stow away from Darling Harbour on some ocean liner?” Thangaraj said.

He said his client had agreed to a police interview and denied any violence or lack of consent.

He argued there was no suggestion of any injury around the woman’s throat, regarding the allegations of choking, and “nothing in the fact sheet which suggests even a slight bruise”.

He said the “social media matters” had occurred after the arrest and Gunathilaka had “not encouraged a single person to do a single thing”.

“Because they have found the social media of the complainant, why should that be held against him?” he said. “It’s totally irrelevant in respect of bail.”

Magistrate Janet Wahlquist granted bail on conditions including a $150,000 surety from an acceptable person, the accused agreeing to forfeit $50,000 if he failed to comply, reporting to Eastwood police station daily, a curfew from 9pm and 6am, not contacting the complainant and a ban on accessing Tinder and dating applications.

The defence had proposed an electronic monitoring bracelet, but the condition was not imposed.

The magistrate said there were “a lot of people who are presently prepared to put up their hand for him” who would be substantially impacted if he did not answer his bail.

Police say Gunathilaka accompanied the 29-year-old woman to her home, where she had “only agreed to continued sexual activity if the accused wore a condom”.

Gunathilaka is accused of repeatedly choking the woman, who then allegedly noticed a condom on the floor. His second charge relates to the alleged aggressive digital penetration of the woman’s vagina, while the third and fourth charges are allegations that he had put his penis in her mouth.

The case returns to court on January 12.