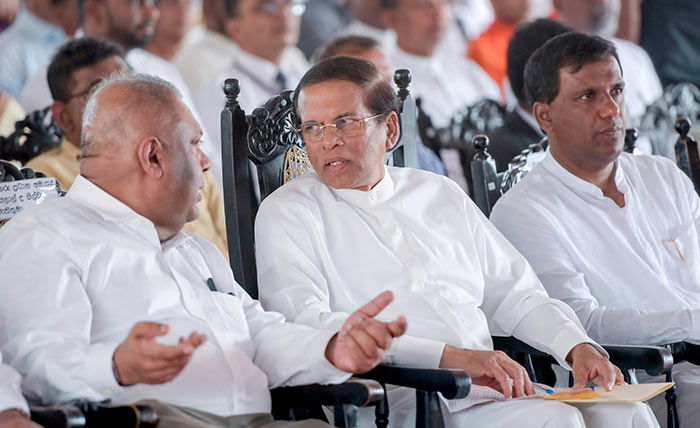 President Maithripala Sirisena said he will ensure the death sentences passed on drug offences are carried out soon.

Addressing the Matara district national programme on drug prevention themed Mathin Nidahas Ratak held at the Sanath Jayasuriya stadium last morning (30), the President said the death penalty is carried out for drug offences in the Philippines. It is also carried out in India and even in America. “Sri Lanka will follow suit very soon,” he said.

The President also said he had entrusted the Armed Forces and the Police to eradicate the narcotics menace as they had destroyed the LTTE.

The President said the main reason for holding the programme in Matara was because the largest detections of narcotics in the recent past had been made in the Southern Province and mainly in Matara.

The Southern Province leads the other provinces when it comes to education and health but is sadly in the largest detections of narcotics.” Students are the main target of narcotic dealers and therefore we conduct awareness programmes in schools,” President Sirisena said.

He said that when the ‘National drug eradication week’ was announced, a student had questioned at one of these programmes if the drug menace could be eradicated in one week. Another student had wanted to know why the government does not ban the sale of Alcohol and Tobacco while another had said that it was because the government earns a revenue from taxes imposed.

“Sadly all these students are correct,” he said.

The Presidential Task Force, together with the Navy and Armed forces conducted drug prevention awareness programmes in five districts at 51 schools and the President handed over certificates of appreciation to the best contributors. The Ruhuna University received a cash award for establishing a research unit to eradicating narcotics.

The President said that the mobile phone has become a challenge to eradicate the nation of drugs and narcotics and emphasised that parents should pay more attention on how their childrens use the device.

The Presidential task force for drug prevention has been conducting programs for drug prevention since 2015 under the guidance of President Maithripala Sirisena and 11 conferences have been held district wise to make the public aware.”Narcotic eradication units should have been established in every state institution by now if the programmes have been implemented properly and those students would not have posed those questions,” the president said.

Since last October a series of programmes regarding eradicating drugs has been conducted in the Matara district since last October under which all the 650 Grama Niladhari Divisions of the district carried out programs rurally.

President Sirisena together with other dignitaries and all others present pledged to rid the nation of the use of tobacco and narcotics. Finance and Media Minister Mangala Samaraweera, Southern Province Governor Keerthi Tennakoon, Chief Minister Shan Wijelal de Silva, Deputy Minister Buddika Pathirana, MPs, Provincial Councillors, senior officials and a large gathering of students were present.