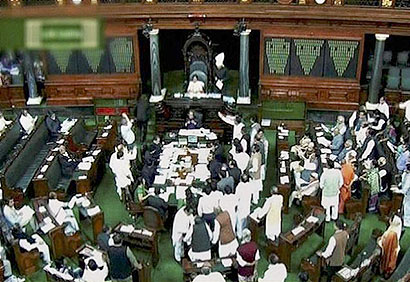 Amid sustained pressure by political parties from Tamil Nadu, Government on Wednesday agreed to have a discussion on the Sri Lankan Tamils issue in Lok Sabha on Thursday.

Tamil parties are up in arms after fresh allegations about human rights violations against ethnic Tamils by Sri Lankan forces, in the wake of charges that 12-year-old son of slain LTTE Chief V. Prabhakaran was shot dead in cold blood.

The Tamil parties are pressing the government to take a tough stand against Sri Lanka on a U.N Resolution in the coming days.

In an attempt to mount pressure on the government, MPs of DMK, a major partner of the ruling UPA, yesterday wore black shirt while attending House proceedings.

They also held a protest inside the Parliament House complex on the issue.

Congress MPs from Tamil Nadu have already told party vice president Rahul Gandhi that India should take a stern stand against Sri Lanka at the upcoming UN meet on Tamils issue as it was crucial for the party’s future in the state.

The MPs had said that Mr. Rahul was told of the problems faced by Sri Lankan Tamils and the need for a political reconciliation and implementation of the 13th Amendment.

India has already said there should be accountability for such issues but has remained evasive on the position it will take at the UN on a resolution against that country. (Courtesy: The Hindu)